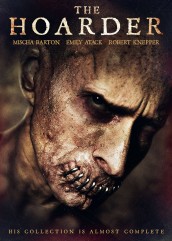 Not a bad trapped in a hostile location horror flick

Don’t worry, THE HOARDER isn’t a branch off one of those television shows where it shows people with real problems gathering a ton of needless junk and unable to get rid of everything until their houses are sometimes filled to the brim with crap.

Instead the hoarding in question here has to do with people. Gathering people as pets and keeping them isolated in the basement of a fairly sophisticated public storage enterprise.

Mischa Barton (from THE OC) and Robert Knepper (long a fan favorite as the vile T-Bag on PRISON BREAK) star in this horror flick about a group of individuals just doing their thing taking or delivering stuff from their storage unit when a crazy dude with stapled lips starts terrorizing them. Soon, people start dying or getting captured and they believe it is the stapled-mouth dude.

However, before long they learn that maybe it isn’t that guy who is doing the bad deeds (although he also doing them) but something more nefarious is going on. As much as more than maiming and killing is about as nefarious as you can get.

THE HOARDER is decent enough. The set is pretty cool because the storage unit where everything takes place is very well done and the claustrophobic atmosphere gives the movie a nice cramped feel. Plus, while some of the deaths are off-camera, the ones that are on camera are pretty brutal at times.

Only one quick making of featurette is included in the extras but with the movie not being too shabby it might be worth putting some time in to check this out.