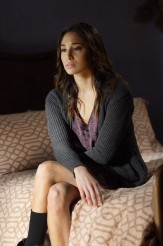 A decent episode, though the roommates are on separate paths again 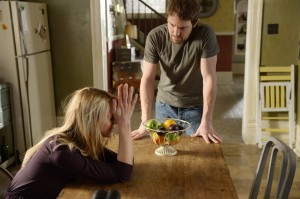 BEING HUMAN is generally at its best when our main characters – vampire Aidan (Sam Witwer), ghost Sally (Meaghan Rath) and werewolves Josh (Sam Huntington) and Nora (Kristen Hager) – are all together. “Gallows Humor” separates them of necessity, as they’ve all got their own genus-related issues to handle. The results make sense, but lack the unique kick when the ensemble is together and humming. Aidan’s dramatic thread here is good, Josh and Nora’s feels like a retread and Sally’s is so ambiguous that we’re waiting for another shoe to drop.

With her brother Robbie (Jesse Rath) now a ghost, his corpse on the basement floor, Sally resolves to bring him back to life, even though her previous adventure in bodily resurrection ended in disaster. Josh and Nora realize they can’t talk her out of it, Jesse thinks he’d like his body back and Sally doesn’t know the right spell to restore him, so she manages to bring back witch Donna (Amy Aquino) to help her with it. Donna takes Sally back to when Donna was resurrected by a coven in Colonial times – a young woman’s life force was dissipated for the spell to work, meaning the young woman gets no afterlife. Donna says she’s tired of the cycle – if Sally is going to bring Robbie back to life, Donna wants to give her own life force for the spell. Sally is reluctant, but this is her brother. While she goes to prepare the basement, Donna has a little chat with Robbie, telling him he has to believe he’s worth saving. Then Donna comes down to the basement, saying Robbie has left. Donna wants Sally to return her to the moment of Donna’s original death, which Sally does.  Sally then winds up trapped in the past on the night of her death.

Aidan, freaked out over feeding and killing, calls current Boston vampire boss Kenny (Connor Price) to help clean up the mess. Kenny tries to reassure Aidan, but Aidan goes to his wife Suzanna (Katharine Isabelle). Suzanna sees right through Aidan’s lie that he’s kept clean and chains him up. Aidan, going through his version of withdrawal, begs forgiveness, saying the names of everyone he’s ever killed. Suzanna finally tells Aidan her first victim was their young son. Aidan at first can’t believe it, then almost stakes Suzanna, and then they collapse sobbing into one another’s arms.

Josh and Nora are still trying to negotiate the rough patch caused by Josh’s full-moon infidelity with another werewolf. Josh comes into Nora’s room, wants to cuddle and they start kissing. Then Nora thinks better of it, but Josh won’t stop – when she tries to make him get off her, he turns into his wolfman state. Nora escapes and Josh comes back to himself, but Nora says she’s afraid of him and leaves the house with a suitcase.

Nora’s concern is understandable and legitimate. Even Josh doesn’t know what’s going on with his partial transformations, and it’s clear to him and everyone else that he’s not in control, so being in bed with him is not such a good idea. On the one hand, we can imagine a less sturm-und-drang way of handling the whole situation, but on the other, Nora has been through a lot lately and Josh is Josh – it would be out of character for him to not let things ramp up until he’s desperate and miserable.

Aidan can’t forgive himself, but we can forgive both him and Suzanna their hysteria, if perhaps not their actions. Aidan really does want to be on the wagon, but Suzanna is hardly the best sponsor. As for her admission that she killed their son – it’s a good bet that she’s never shared this with anyone before – both of them absolutely falling apart seems the most plausible reaction.

Then there’s what happens with Sally, Robbie and Donna. Given Donna’s history and Robbie’s failure to say goodbye, not only do we wonder if Donna may have done something with the young man’s spirit, it seems strange that the possibility of wrongdoing on her colleague’s part never occurs to Sally. Aquino as always does a terrific job, and Rath is soulful and emphatic. Still, it’s peculiar that Sally is so trusting, especially since Donna has previously gone on and on about how Sally is endangering the mortal plane with her presence.

“Gallows Humor” leaves us wondering where everyone will go from here, which is doubtless the point. It just doesn’t have the joy of those episodes where the characters are together, dealing with their similarities, their differences and their relationships with one another.