Home » If I Stay Review 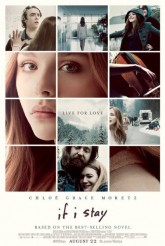 Movie Review: IF I STAY

Chloe Grace Moretz as Mia Hall is so luminous that she actually persuades us that budding rocker Adam (Jamie Blackley) the coolest kid in a Portland, Oregon high school, would fall hard at first sight for her solitary cellist. What’s even more amazing is that we continue to give credence through this as we get to know Mia better. She is meant to be our heroine and she is our narrator – she is also aggravatingly passive-aggressive, which the filmmakers don’t seem to realize.

Mia also spends much of IF I STAY, based on Gayle Forman’s novel, in a coma after her entire immediate family is involved in a car accident. Mia finds herself outside her own body, alternating between racing around the corridors to find out what’s happened to her kin and reflecting back on her life as she must decide whether to live or die.

Prior to this, Mia’s biggest decision is whether to remain in Portland with the adoring Adam – when he’s not on the road with his increasingly successful band – or to apply for a scholarship to Juilliard in New York. Mia has loving, understanding, former rocker parents (Mireille Enos, Joshua Leonard) and a non-annoying little brother (Jakob Davies).

Mia is also, in the manner of teen dramas, depicted as an insecure loner with a single good friend (Liana Liberato), even though with her gorgeous looks and prodigious mastery of the cello, it seems more likely that she’d be one of the most popular students at some incredibly competitive arts academy. Given that her dad bought her a cello at a very young age because he recognized her talent and drive, it’s strange that there’s nothing like this in her life before the Juilliard audition.

This is one of the ways in which IF I STAY trips over itself. In its efforts to make Mia’s pre-accident life idyllic, any roughness is tidied up right out of semblance to reality. Mia has no professional drive, apparently because ambition is deemed unseemly here – she wants to go to Juilliard because … well, it can’t be because she thinks they have better cello teachers there than who or whatever has been inspiring her thus far, because she’s already expert. Blackley’s Adam is written as a high school senior with a gift for always saying the right thing without being a b.s. artist, Mom and Dad have no marital issues or money woes  Screenwriter Shauna Cross and director R.J. Cutler seem to confuse being admirable (which Mia is) with being interesting.

This isn’t to say that IF I STAY is dull – it zips around in time with decent enough incidents and returns to the hospital whenever suspense begins to lag. It also shows Enos in a very appealing Earth Mother role. But overall, we feel like we’re being told a story – which, by the way, we literally are, as Mia’s voiceover thoughts cover the film – rather than being immersed in an experience. Moretz pours heart and soul into her self-immersed character, but this isn’t quite enough to make IF I STAY work on other levels.