Home » The Case Against 8 The Wedding Date soundtrack reviews 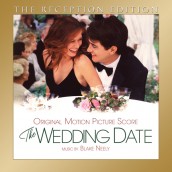 CD Review: THE CASE AGAINST 8 and THE WEDDING DATE: THE RECEPTION EDITION soundtracks 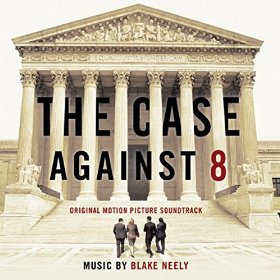 THE CASE AGAINST 8 soundtrack | ©2014 Cow On the Wall Records

Now best known for putting propulsive arrows in the Green ARROW‘s quiver, Blake Neely seeks musical justice in a far more subdued, but equally powerful manner when it comes to overturning America’s legal prejudice against gay marriage. Marking another dramatically effective documentary score after chronicling The Challenger’s MISSION OF HOPE, Neely once again conveys a poignant, human face on landmark events. His CASE AGAINST 8 takes on an ethereal, subtly Americana tone as heard for rhythmic beds of guitars, piano, strings and poignantly sampled atmospheres. This score isn’t about winning the fight against voter and government-mandated prejudice with fist-waving, but rather a soft spoken, gracefully melodic sense of conviction, his emotional drive growing from despair to a bolder sense of victory and determination for the Supreme Court ruling. When the flag waves here to celebrate all colors of the rainbow, it’s with a humble thanks the carries the feeling of heart and homeland, the score’s finally sweeping orchestral patriotism well earned in a good fight that’s a long way from over.

2005s THE WEDDING DATE marked a slightly less momentous, but nonetheless important timetable for Neely’s musical destiny, as this completely charming rom-com score signaled an auspicious beginning for his career after time spent orchestrating, conducting and composing for the likes of Hans Zimmer and Michael Kamen. And one can certainly hear how Neely picked up on their rhythmic appeal as he peps up a classically orchestral bridal tone with a pop groove. It’s a thoroughly likable date with the kind of smart comedy scoring that plays the meet-cute romantic travails of what’s essentially a reverse PRETTY WOMAN with bouncy orchestrations, of course full of shimmering bells, love struck guitars and a nice feel for thematic melody that charts the race to the happy ending altar. Neely at first goes for frisky energy before playing true emotion, then heartbreak and renewed attraction with the pre-determined rom-com course. But this WEDDING‘s warmth is truly genuine, and a big reason that fans haven’t forgotten about Neely’s score after nine years – a fond remembrance that now sees Buysoundtrax produce an “ultimate” WEDDING album, complete with alternative cues, demos and Dominik Hauser producing new takes on the film’s source songs, including an upbeat 50s version of “One Fine Day.” It’s a perfect date night soundtrack indeed, the definition of peppily emotional romantic scoring at its sweetest.

Click on the link to Purchase THE WEDDING DATE soundtrack

Click on the link to Purchase THE CASE AGAINST 8 soundtrack

Article Source: Assignment X
Article: CD Review of  THE WEDDING DATE and THE CASE AGAINST 8 soundtracks