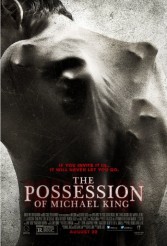 THE POSSESSION OF MICHAEL KING plays mix and match with its initial found footage set-up. Director/writer David Jung, working from a story he crafted with Tedi Sarafian, makes the switching back and forth fairly seamless and unobtrusive, though people who don’t like found footage probably won’t find this to their taste. The protagonist, Michael King (Shane Johnson), is followed by a camera operator buddy for some of what he’s doing, and he does have his house wired for picture and sound, but there are scenes where it seems as though a camera couldn’t be present.

However, thanks to Johnson’s entirely committed, well-pitched performance and Jung’s careful blend of L.A. funky middle class and grunge, there’s a binding aesthetic here that works. We’re drawn down a dark rabbit hole where people do strange things for strange reasons, and if it’s not particularly terrifying, it certainly creates an immersive environment.

As the title suggests, Michael sets himself up for a very rough time. Initially planning to make a documentary about his happy family – wife Samantha (Carla Pifko) and young daughter Ellie (Ella Anderson) – Michael decides to make a very different sort of film after Sam dies in an accident. Always an atheist, Michael decides to debunk religion and superstition by chronicling what he assumes will be his failed attempts to raise a demon.

It’s not necessary to even be familiar with the horror genre in general, let along the found footage subgenre, to guess what happens next, though filmmaker Jung has some fun with the folks Michael meets on his quest. Funnily enough, so many of the rituals involve such high-powered drugs that a different filmmaker might play the is-this-real-or-a-bad-hallucinogen-trip guessing game throughout, or at least longer than Jung does.

However, POSSESSION seems intent on proving the existence of God and good via the depiction of the Devil and evil. This isn’t precisely new, but the film avoids the kind of over-the-top proselytizing that has characterized some other recent genre offerings. (The Church is no help at all here.) It’s possible to watch the movie and not feel lectured.

On the other hand, POSSESSION loses a few points simply for a final scene that indicates the filmmakers must think the audience is very slow on the uptake, since they imply what we see here in the film’s opening and underscore it throughout. The scene itself isn’t surprising; it’s surprising that they think we need it spelled out so distinctly – in which instance, they should simply put it when it occurs in the story’s timeline.

Otherwise, THE POSSESSION OF MICHAEL KING is unlikely to terrify genre fans, but it’s got a consistent sense of tension, strong atmosphere and a lead actor who really makes you fear for his character. It’s not brilliant, but for what it aims to do, it’s good.

Related: Movie Review: IF I STAY