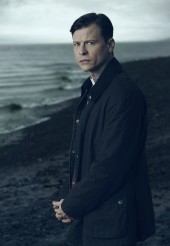 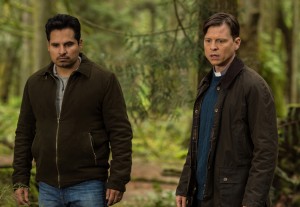 Fox’s new series GRACEPOINT, Thursdays at 9 PM, is an American remake of the BBC’s BROADCHURCH, with some changes. In both, a young boy is murdered in a small coastal town – English in BROADCHURCH, Northern Californian in GRACEPOINT – and in both, just about everyone is a suspect. Also in both versions, David Tennant plays in a police detective, brought in from outside by the local force to head up the investigation.

One of several changes, however, is that the dead boy’s family in GRACEPOINT is Episcopalian. Kevin Rankin plays the Reverend Paul Coates, who has a close relationship with grieving mother Beth Solano (Virginia Kull) and a somewhat adversarial relationship with angry father Mark Solano (Michael Pena).

Rankin, a native of Baton Rouge, Louisiana, can currently be seen on the big screen in WILD; earlier this year, he appeared in DAWN OF THE PLANET OF THE APES. He has a prolific career that includes THE DALLAS BUYERS CLUB, playing Kenny in the last season of BREAKING BAD, recurring roles on JUSTIFIED and BIG LOVE and an early guest star gig in the “Family” episode of BUFFY THE VAMPIRE SLAYER (he was Cousin Donny).

At a party Fox throws for the Television Critics Association, Rankin talks playing GRACEPOINT’s man of the cloth.

ASSIGNMENT X: Were you familiar with BROADCHURCH when GRACEPOINT came up?

KEVIN RANKIN: Only when I finally went in for it. I watched the pilot to understand the tone, but I wasn’t familiar with the show when I came on.

AX: So you’re not basing your character on his equivalent character in BROADCHURCH …

RANKIN: I didn’t watch BROADCHURCH, so I completely reinterpreted it for our culture. There’s a priest on BROADCHURCH who was very Irish Catholic. Over here, I’m Episcopalian. There’s a bit of a difference.

AX: For one thing, Episcopalian ministers are allowed to have a romantic life …

RANKIN: Exactly. So there’s a whole other world offered to me as a character. So I didn’t do a lot of research with the BROADCHURCH character. I did mainly what was offered to me as an American Episcopalian. I looked up a lot of their sermons on line, but what I noticed was, every sermon is different with personality, so I understood that it’s all about the personal choices of the minister.

AX: How do you see the Reverend’s relationship with Beth Solano?

RANKIN: My character is from small town of Gracepoint, I grew up there, I left after high school and I was gone for a few years, but I came back as a minister. There are a few years that are blocked out, so there are a few years where no one knew what happened with my character. So I think my relationship with everyone back in Gracepoint is a little bit loaded. They knew me from when I was younger, but they don’t know where I’ve been as an adult.

RANKIN: It shoots in Victoria, B.C., but it doubles as a Northern California coastal town.

AX: Is GRACEPOINT’s storyline story disturbing to you? Is it intriguing to you?

RANKIN: It’s both. It’s really disturbing as a [real-life] father, with [a story involving] the murdered child. Intriguing, meaning just in talking about Gracepoint as a town where people grow up, they never leave, basically. So when someone is murdered there, it’s probably by someone who’s from that town. That’s kind of a big deal. So it makes you question your neighbors.

AX: Are you going into it from the point of view of just following what’s in the script and seeing where that takes you, or are you putting into it, “Now, if I was counseling a mother whose son had been murdered, how might I approach it?”

RANKIN: Both. I would see what the overall story was, where I fit it, but ultimately on the day, in the moment, it’s all about the scene, and as a priest in the show, I’m counseling the mother of a dead child and it’s more about that than the overall story.

AX: Who do you play in DAWN OF THE PLANET OF THE APES?

RANKIN: I play a character called McVeigh. I share a whiskey with one of the apes.

AX: How was it working with the other actor’s motion capture?

RANKIN: It was very interesting, because it’s motion capture, green screen and IMAX. So we would do a scene with the actor, and then the actor, Toby Kebbell, would leave, and we’d do the scene with only eye marks. I did a scene with no one. Toby Kebbell is a brilliant actor. He honestly made me feel that I was there with an ape, he was that good. That film was fantastic.

RANKIN: I’ve got a Reese Witherspoon called WILD, same director [Jean-Marc Vallee] as DALLAS BUYERS CLUB, that I was in. I did one of the last episodes of NEWSROOM. The last season is only going to be six episodes. I come in as a character that I can’t divulge who it is, but for the entire second episode, it’s just me and Jeff Daniels in a room for fifteen, sixteen pages of Aaron Sorkin dialogue.

RANKIN: I’ve never done anything like that before. Speaking Aaron Sorkin’s words for fourteen pages on one day of work was amazing.

AX: Who was the director?

RANKIN: It was Paul Lieberstein, who was from the American OFFICE. So I was a big fan of his also.

AX: Anything else you’d like to say about GRACEPOINT?