The pacing slows down as it starts laying the seeds for Season 3 conflicts, alliances and confrontations 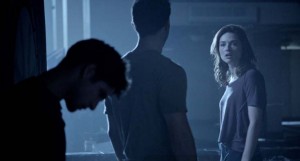 After the break neck speed of the season premiere, TEEN WOLF eases into a much more familiar and deliberate pace with “Chaos Rising” as many of the seeds for where the season is going are planted.

Isaac (Daniel Sharman) is an important key for Scott (Tyler Posey) and Derek (Tyler Hoechlin) as they try to figure out who the Alphas are and what they’re up to.

Much of the episode’s investigations lead them to an abandoned bank building where the Alphas are keeping werewolves in the dark and away from moonlight, so their rage and anger builds up to make them a more vicious fighting (or perhaps killing) machines.

Meanwhile, Allison (Crystal Reed) has also figured out the bank is where answers to her questions lie (namely the symbol that was bruised on to her and Lydia’s (Holland Roden) arms.

The big twist arrives when Derek realizes his sister, who he thought dead, is part of the Alpha pack.

Like BUFFY THE VAMPIRE SLAYER, shifting loyalties and alliances come to the fore, as Peter (Ian Bohen) seems to be on the good side of this 21st Century Scooby gang as he tries to assist in finding the Alpha’s location.

It also looks like (according to next week’s previews) Daddy Argent (JR Bourne), who has given up hunting, may be joining the team too, since the Alphas are going to be posing a pretty insane threat.

As always, TEEN WOLF continues to look and feel like a feature film, with showrunner Jeff Davis providing another excellent script and director Russell Mulcahy continually keeping the show’s tone both scary and light at the same time.

I have to admit, the story, at times, does get a bit confusing, only because it’s been a year in between seasons, so trying to remember all the character dynamics, particularly with supporting players, takes some time to get up to speed.

Overall, “Chaos Rising” continues to show off why TEEN WOLF is one of the most underrated genre shows on TV. With a consistency and quality that often times usurps THE WALKING DEAD, it’s MTV’s best kept secret. Thankfully, the audience continues to grow, and that’s a great thing, because it’s a series that deserves to have a long and lengthy run.