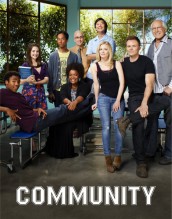 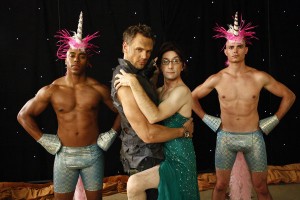 While it’s no secret that COMMUNITY creator Dan Harmon was unceremoniously fired last season just after the show was renewed, the unfortunate part is that with Season 4, it’s clear he was the glue and “voice” of the show that kept it together.

His unique point of view and strange sense of humor kept COMMUNITY alive and well. Even when it had an uneven episode, it was still was his baby.

Now that new executive producers are on board, they made a promise the show would be as strange and weird as ever, but the Season 4 premiere is an absolute mess.

“History 101” completely misses the point of what made COMMUNITY so great. It wasn’t the constant barrage of pop culture references, it was how weird and quirky the characters were – and how the reacted within those pop cultural tropes.

The new episode back deals with “change”, hoping to make COMMUNITY fans feel okay that the show may have lost its voice. It starts off with Abed (Danny Pudi) reverting to a sitcom version of the show. Not remotely funny.

Then there’s a “Hunger Games”-styled parody which isn’t funny. And then there’s an insane little animated “baby cartoon” version of COMMUNITY. Not funny either.

The dialogue isn’t as sharp or crisp as it used to be – and the characters are spouting off lame one-liners instead of actually forming the wildly rapid fire tornado of dialogue the show usually employs.

Storywise, Jeff (Joel McHale) has one more history class before he graduates early (who took a summer class) and we see how the Dean (Jim Rash) tries to make it impossible for him to graduate.

Meanwhile, Abed is having a hard time dealing with “change” which is why he creates the sitcom version of the show and his “happy place” version with the animated kid version.

I wish the show were funnier, I wish it would have proven us wrong that without Dan Harmon the show could still be strong, but it’s not.

It’s awful and a sad, sad creative end to a series that was always sharp and very funny. Maybe this episode is the exception to the rule. Maybe COMMUNITY will get back on track. However, the truth is, the worst case scenario has reared its ugly dark head and the darkest timeline has indeed come to fruition.