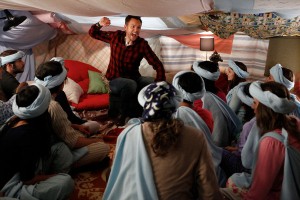 This week’s COMMUNITY is essentially the second part of last week’s cliffhanger where long time friends Troy (Donald Glover) and Abed (Danny Pudi) start a war against each other when one wants to build a pillow fort in the school and the other a blanket fort.

So how does this all pan out? Well, “Pillows and Blankets” becomes a faux Kevin Burns-esque documentary on the battle lines drawn between these two factions – sending up old Civil War history and regurgitating it out under the guise of “A Greendale Campus Television Production.”

Like many of COMMUNITY’s episodes, this one is as weird as they come – telling the story in the past tense, through more imagery and voiceover than actual scenes and it is quite good.

It’s interesting to see the episode find a truce between Troy and Abed, but this acrimony can only make for more interesting stories moving forward.

There are tons of surreal sight gags, but the highlight is the secret weapon Pierce (Chevy Chase) proposes to Abed (essentially a Pillow Man).

It’s really funny stuff and it’s one of these episodes that the network probably gets scared about because it is so different and structurally a 180 degrees from the way most shows operate (but we know COMMUNITY stopped operating normal years ago).

COMMUNITY once again provides ample laughs and a funny scenario. It’s creating its own in-joke mentality, but it makes it even more rewarding to long time fans that pick up on all the jokes.