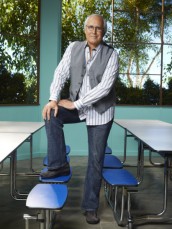 The actor talks his contrary character, plus FLETCH and SNL 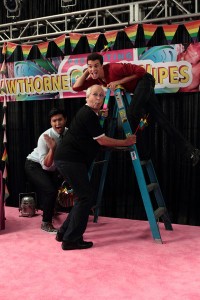 To the delight of its devoted fans, COMMUNITY has resumed its third season on Thursday nights at 8 PM. Created by Dan Harmon, the half-hour comedy started with the premise of young lawyer Jeff Winger (Joel McHale) having to return to community college to shore up his law degree, but as it proceeded, the show has taken on movie parodies, Claymation and all manner of other unpredictable content.

Chevy Chase co-stars as Pierce Hawthorne, who made a fortune in the moist towelette business but joins the central study group as a way to make friends, even though he’s not very good at it.

For readers (there can’t be many) who have somehow missed pop culture icon Chase’s career, a few highlights have been his actor/staff writer stint on the first season of the still-running SATURDAY NIGHT LIVE and his starring in the NATIONAL LAMPOON VACATION franchise, the FLETCH detective comedies and the golf lovers’ cult hit CADDYSHACK.

COMMUNITY is Woodstock, New York native Chase’s first gig as a series regular on a sitcom. At a party thrown by NBC for the press, he talks about Pierce, network comedy and some old memories as well.

ASSIGNMENT X: Were you looking to do a half-hour comedy at the time COMMUNITY was offered to you?

CHEVY CHASE: No. I was very happy being at home the last few years with my wife and my children in upstate New York. There was never a chance in my life I would do a sitcom. I don’t watch them. But I got a wonderful script and it was very funny, really funny writing.. I’ve got to tell you, I came out here [to Los Angeles] for various other business reasons and I went into that office and I said, “I’d really like to be a part of this,” because it was a very funny pilot and script.

AX: Has NBC maintained a special relationship with you since SATURDAY NIGHT LIVE? 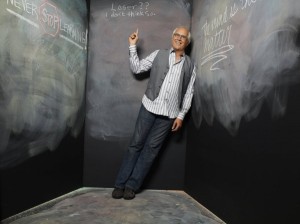 AX: When you started doing COMMUNITY, did you think it would last?

CHASE: I liked the pilot script. “I can do this guy, I like him, I kind of want to play with him.” [joking] Knowing very little about the business, now I’m stuck for ten years.

AX: Were you expecting to get a third season?

CHASE: I was expecting to get an Emmy [laughs].

CHASE: I never thought about it, because I’ve never done this kind of thing. So I didn’t know whether it would or it wouldn’t. I don’t follow the politics of it. I don’t follow even the business of it much. I was a movie guy, with fifty-some movies, and I always expected I’d make another one. It never occurred to me that we wouldn’t [have a third season]. It’s not that the ratings were great, when you put it all together and you read them in VARIETY every week and they’re 4.8 or whatever, but it was just that it’s such an attractive cast of young actors and it has funny acting. It makes you laugh. And there may be an audience for it, so I never thought about it. I’m glad that we did.

AX: Is the experience of doing COMMUNITY what you expected when you got into it?

CHASE: No. It’s not even remotely what I expected. Seeing as I had never done anything like this except movies, usually, you know when you’re shooting a movie what’s on the line in terms of the money, and you know usually after two or three takes that you’ve got it and you move on. Apparently, in this new age of digital, you can have thirty takes and nobody’s changing film. So the hours are awful and the work that goes into it to keep your energy up and make the response and the acting better is harder. It’s harder. 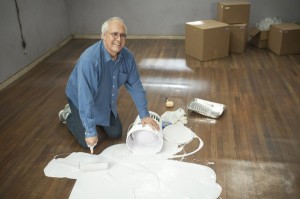 AX: Do the writers run in and change the dialogue at the last second?

CHASE: Yeah, there are changes. We do alternative dialogue.

AX: So there is some improvisation?

CHASE: Yeah, there is.

AX: Are you enjoying getting to do improv again?

CHASE: Yeah. As long as it fits within the time slot [laughs]. Some of it fits and it doesn’t hurt the set-up or the story and I think it’s great.

AX: Do you feel like Pierce is evolving at all over the seasons?

CHASE: It doesn’t seem to me that he gets any more intelligent or less bigoted [laughs], but I’m okay with that. It’s kind of asking like, “Do you think Pete Rose has evolved?” I think he’s probably better with peeling a banana and that’s about it.

AX: Do you think if Pierce got a little enlightened there could be something funny you could do with him being enlightened?

AX: He might think he’s enlightened and not be?

AX: Is there anything you feel like Pierce can’t get away with as a character?

CHASE: No. And I’ve noticed this [laughs]. He can say words like “dick” – I mean, it’s unbelievable, but I think something’s carrying over – the sort of quote “charm” I brought to characters in film. I think it’s a little of that. I’m not much of an actor, so you know me, and you know that I don’t mean any harm, you know that I enjoy acting funny, and you accept it or you don’t watch. And it’s not like I’m saying the worst words in the world. But I’m a little amazed – I said “Dick” and “I love your sweat on my balls” – where do you hear that?

AX: Are you glad that you don’t have to carry the show?

CHASE: You mean I don’t get that blame if it doesn’t go well? [laughs] I don’t even think in those terms. It’s such an ensemble show that we all sort of have to carry it. Clearly, the lead character is played by Joel McHale. Actually, he reminds me of me when I was younger. He’s terrific and we’ve become very good friends and maybe Joel, because he’s young, feels the pressure of, “It’s on me,” but I don’t see it in him – I don’t see it in any of the actors. 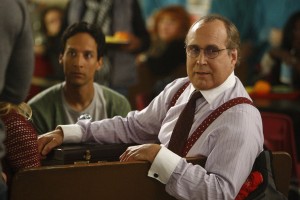 AX: How is it working with a cast full of other actors who have grown up watching your work? From what some of them have said, it sounds like the rest of the cast sort of genuflects in your direction every morning.

CHASE: That’s bulls***. That’s such a load. It’s very nice to have that sort of a compliment. The thing is, it comes out once, and then people ask the actors, “What’s it like to work with an icon and a legend” and that crap. They’re all very good and I’m just an older actor at this point, and that’s fine.

AX: Joel McHale has said he wanted to repeat a lot of your famous movie lines back to you.

CHASE: For some reason, Joel knows all of FLETCH. Which is funny, because I made it up as I went along [laughs].

AX: How do you react when people on the street quote lines at you?

CHASE: It just goes by. I mean, it’s flattering and I know that a few movies like CADDYSHACK, FLETCH, some of the VACATIONs, that that generation latched onto and liked and I’m flattered by it, particularly by FLETCH, which I winged, basically, but they get over it. We’re all the same, we’re all acting.

AX: Would you do another VACATION movie? You probably get people asking you about that from time to time.

CHASE: You do. If you’re a famous actor and you’re walking around, people are like, “Hey, when are you going to do another one?” That doesn’t generally sway a studio.

[Editor’s Note: Since the interview took place, Warner Bros. announced it is developing a VACATION reboot, but following Clark Griswold’s son Rusty with the intent of bringing the Clark character back in a different capacity]

AX: Are there any characters you’ve created you’d like to play again?

CHASE: I’m still Fletch. I made the guy up. I winged it. If I could play Fletch [again] – in a minute. I don’t mean to be the mentor for some young Fletch, I am Fletch. And I’m not very ambitious. I’ve made a lot of movies that made a lot of money. I don’t [need to] work. The real fact of the matter is, if you’re asking, I am Fletch and I am Fletch always. That’s not going to change

AX: When you were on SATURDAY NIGHT LIVE back in 1975, did you have any sense at the time that it would become such a cultural touchstone and still be on the air in 2012?

CHASE: I had no idea. All I knew was, I was the head writer and I was going to be on the TV. I had to do my own political satire in the form of Weekend Update and I did a lot of athletic stuff, stunt falls and stuff, and I became famous that year. I had no real thoughts about whether the show would last forever or not. I was the only guy there with a contract with NBC with my option to leave after a year. The other actors had to stay for three years. All the writers had to stay for five. I knew that I only wanted one year and I did leave after one year, but I regretted it later, because I missed it.

AX: Do you have a memory from that year that particularly sticks with you?

CHASE: There are many. The one that really sticks with me is when I did such a bad fall that I was in the hospital for a whole week [laughs]. Danny [Aykroyd] was Carter and I was Ford and we were debating and at the end of the debate, I fell forward with the lectern that [was supposed to be] padded. The old prop guy, about eighty, had forgotten to line it with foam rubber, so I just hit solid on the wood and it happened to be right down here and it was … 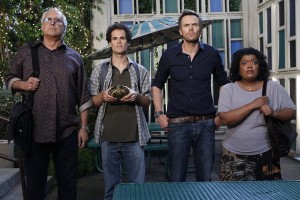 CHASE: I was pissing blood, how’s that?

AX: You were satirizing Carter and Ford then. If you were writing political satire now, would you find it daunting at all?

CHASE: It’s daunting because of the eight years of Bush. I don’t know what kind of comedy I’d write about it. I don’t do that [as a job] any more. I’ve done a lot of writing about [the Bush presidency] and it’s just for my own edification.

AX: Is there anything you’d particularly like to get to do as Pierce in upcoming episodes?

CHASE: I’d like to play some really good jazz piano.

AX: Is there anything else you’d like to say about COMMUNITY?

CHASE: All I can say is, I’m very happy. It’s a lot of fun and it’s a great group of people in every way – cast, directors, writers – and it’s a lot harder work than I thought in terms of the hours, but it’s worth it. I’ve never watched a sitcom in my life, and somehow I took a job on one, and I find it very amusing and fun. And that’s probably why [people] should be watching it.