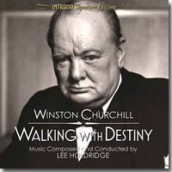 When so many documentaries are hampered by the budget to truly give them a rousing sense of history, Lee Holdridge has often been lucky to bring the battle-filled past alive with the army of a full orchestra, giving his music the stuff of legend for such Intrada-released soundtracks as THE EXPLORERS and IN SEARCH OF PEACE, Holdridge’s rousingly dramatic, and deeply emotional approach is no better suited than for one of WW2’s most tenacious figures in WINSTON CHURCHILL: WALKING WITH DESTINY.

Never before had Britain seemed on the verge of annihilation than during the Nazi blitzkrieg, if not for the bulldog stance of their Prime Minister. Holdridge’s music not only embodies the core of his resiliency, but also hears the united England through it. One can detect the spirit of the country’s famed composers Benjamin Britten and William Walton to this surging, bold music, which resonates with both Britain’s dark desperation and its never-say-die determination, especially when warning the world of Hitler’s developing Holocaust.

Yet Holdridge just as powerfully captures Churchill the Man with flute, strings and the piano, creating a real sense of DESTINY that reaches across the years for maximum, heartfelt impact. Holdridge’s sound is of vibrantly melodic flesh and blood, as opposed stock footage and talking heads, a powerful talent that’s on epically intimate display here.