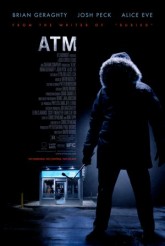 At the beginning of ATM, we have genuine curiosity about what we’re seeing. By the end of the movie, we get an explanation and realize that there was the potential for a good thriller here. However, what we get in the middle is one of those horror thrillers where the main characters behave in such counter-intuitive ways that we lose patience with them.

It’s a freezing cold night as an Eastern financial firm’s annual Christmas party winds down. David (Brian Geraghty) has mismanaged a client’s investments, but he’s more immediately worried by the departure of lovely Emily (Alice Eve) from the company. David’s friend and coworker Corey (Josh Peck) urges David to approach Emily, but when he does and Emily accepts a ride home, Corey insists on getting a ride as well. Then Corey wants pizza – but doesn’t have the money to pay for it. David reluctantly obliges by stopping at an ATM, housed in its own small building in the middle of a parking lot that, after midnight with snow swirling around, is absolutely deserted. David and Corey leave Emily behind in the car, but when they take too long, she joins them inside.

Outside in the parking lot, there is a man. His face and head are obscured by his parka hood and he stands absolutely still. Naturally, our trio finds this unnerving. Then the stranger commits an act of extraordinary violence in the parking lot and our people are terrified.

At this point, ATM has the ability to scare the hell out of us. We understand why the group legitimately cannot use their car to escape, we see that they can’t call for help and we comprehend that they are so cold that it’s difficult for them to function. Furthermore, the mysterious figure outside is legitimately frightening.

Good premise for a horror thriller, right? Yes, but there is only so much we can take from the characters, and Corey uses up a great deal of our goodwill just getting them all stuck in this calamity. Thereafter, we watch in dismay as these people do one wrong-headed thing after another, while failing to do other things. Details are also contrary, with a large dog that fails to come to its owner’s defense, a villain who makes vast provisions for some contingencies but not for others and some pauses for philosophical dialogue that are poorly timed and very unearned.

Director David Brooks and screenwriter Chris Sparling do get some mileage out of the darkness and the creepiness of the antagonist, but they are trying to juggle too many plates. We’re trying to guess whether the menace is human or supernatural at the same time we’re trying to rationalize behavior that is annoying rather than naturalistic. There are some suspenseful moments, but by the time we get to the finale, we feel manipulated and underestimated as viewers. This is not the kind of withdrawal we were hoping for from this ATM.