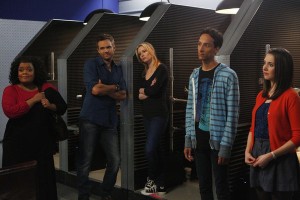 With COMMUNITY airing a three-episode Season 3 finale marathon tonight, Yvette Nicole Brown who plays the outspoken Shirley Bennett on the series chatted with ASSIGNMENT X about the season and where the show could go in Season 4.

Here’s what she had to say …

ASSIGNMENT X: Every time you watch the show, you don’t know what you’re going to get – it must be like that for the actors when they get the scripts.

YVETTE NICOLE BROWN: It’s an acting exercise every week. Will I be doing a drama? Will I be doing a musical? I love it. Where else do you get the chance to be on 500 different shows week after week. The LAW & ORDER episode alone was my dream come true. I’ve probably seen every LAW & ORDER episode fifty times and even if I know who the killer is, if it comes on, I’ll watch it again because I love how it’s crafted.

AX: The show is also written in a way, that tonally an episode could have been written one way, but played another – are there long discussions with [creator] Dan [Harmon] about certain episodes?

BROWN: If it’s an episode where we’re doing an homage, some times we would get together to watch the actual movie. The Chicken Bus episode which was APOLLO 13, [the cast] all watched APOLLO 13 [together]. Abed, is the one who is pop culturally aware and [creator] Dan Harmon is that way and Danny Pudi is not, so Danny will sometimes see a reference that Dan writes for Abed and goes “wait, what’s this movie?” He’ll go on his own to rent the film and find more about it.

AX: I think the hardest thing about the show is I can’t remember the name of the episode titles.

BROWN: I can’t either. I’m used to FRIENDS because it was “The One With Monkey…” because that’s the way you describe it to your friends. Ours are from the mind of Dan Harmon. “Remedial Chaos Theory” – what? [laughs]

AX: The foosball episode was great … which I don’t know the title of.

BROWN: Don’t worry, I don’t know the title of either. [laughs]

AX: And there’s always some kind of emotional resonance amid the weirdness.

BROWN: It’s never emotionally resonant in the way you expect, but by the end of the episode, you will feel something, even if it’s outrage.

AX: Where are the last episodes going? Will we see more about the sandwich shop Shirley and Pierce [Chevy Chase] were planning on doing?

BROWN: By the season finale, it will be addressed. It will either happen or it won’t. We never seem to let things go. They will do a callback from and an episode in the first season. Like the Beetlejuice thing we did – that was three seasons in the making. Nothing is ever dropped on COMMUNITY. 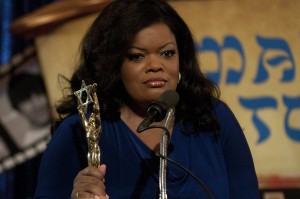 AX: I can’t believe Subway allowed what happened on that episode they sponsored – but I guess that shows how hip they are.

BROWN: They had no conditions, they said, “this is the money, make the show you want, just feature Subway in some way.” It’s really great. Subway, the sandwich shop comes off great. Whatever Rick the Subway guy did, they disavowed it and moved on. I thought it was pretty courageous to let Dan Harmon do whatever he wanted to.

[Editor’s Note: This interview took place a few days before the series was renewed for a fourth season]

AX: Do you feel confident about Season 4?

BROWN: I hope we get a fourth season. I hope we get to see these characters have their full story, but if it ends, it’s been a great ride. It’s been great.

AX: Is there closure with that last episode of Season 3?

BROWN: If this were to end, you will say “damn,” no matter what we do. I do think there’s closure and there’s a look forward to a couple of characters and if the show continues, where they could go. If the show ends, you can imagine them off in some great place or difficult place where they’re smart enough to survive.

AX: What would Shirley say about the last episode of this season?

BROWN: “It’s nice.” She really would. It’s a very satisfying last three or four minutes of the show – not including the tag.