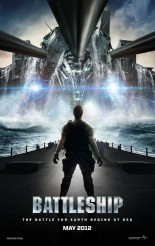 In which we learn for certain that Hasbro is its own movie subgenre and that some elements – like battleships and alien warships, for instance – don’t mix well in storytelling terms

There is nothing wrong in basing a movie on a board game or a toy, or even an amusement park ride (for example, PIRATES OF THE CARIBBEAN). For one thing, it’s been done many times before by now, so there’s no reason to attack BATTLESHIP to be the latest in this line. There is something a little startling in BATTLESHIP’s physical and, to a lesser extent, narrative resemblance to the TRANSFORMERS films. Both are based on products of the toy company Hasbro, but seeing the giant extraterrestrial machines in BATTLESHIP twist, turn and reform themselves, one can be forgiven for thinking of Optimus Prime and Megatron – and half-wishing they’d show up at some point.

BATTLESHIP starts out like many a low-budget straight drama, with diligent career U.S. Navy officer Stone Hopper (Alexander Skarsgard) exasperated by the irresponsible antics of his younger brother Alex (Taylor Kitsch). After Alex gets himself arrested while trying to impress a young woman, Stone decides that Alex needs the toughening up that Navy service will provide. Flash forward and Stone is the commander of his own vessel, while Alex has made it to lieutenant, despite his still headstrong ways. Alex is also still wooing the young woman, physical therapist Sam Shane (Brooklyn Decker), whose father happens to be the fleet’s chief officer, Admiral Shane (Liam Neeson). Sam is pressing Alex to tell her father they want to get married, but Alex’s screw-up before an international naval war games tournament means that he’s likely to be thrown out of the Navy altogether.

Does this sound like a fairly long set-up? That’s because it is, notwithstanding a few scenes involving a radio signal sent out into space, broadcasting from a mountaintop station in Hawaii. The purpose of this beacon is to contact intelligent life on a distant planet. Finally, five blips show up on NASA radar, headed for Earth – these would be advance ships sent by the intelligent life on said distant planet.

The aliens arrive just as a set of U.S. Navy war games begin. After one of the alien ships accidentally takes out most of Hong Kong, they set up a domed force field over part of the ocean around Hawaii, encapsulating several U.S. Navy Destroyers. Don’t worry, an actual battleship will eventually come into play.

In the meantime, everything you expect to happen does. It’s hard to make sense of some of the plot elements. Why, for instance, if the aliens distinguish between an armed threat and something that’s harmless do they attack freeway pylons? Why do the same missiles that barely make a dent in the giant alien craft later prove effective? Why are aliens smart enough to fly across space dumb enough to think an enemy is inactive in the middle of battle, simply because the guns are pointed in another direction?

To be fair, there may be explanations for all of the above buried somewhere in the action, but because the situation is so contrived even in the universe created by the film, most viewers won’t be parsing the details. For that matter, the aliens’ clear distinctions between potentially dangerous devices and harmless organic beings suggests that perhaps they came in peace – they fire when fired upon – but this aspect isn’t followed up on at all, so we don’t know if we’re looking at an actual invasion or simply a colossal intergalactic misunderstanding.

Peter Berg is a strong action director and a lot of the scenes are fun, but the structure is so predictable and the situation so contrived that we can’t buy into it. We are never allowed to forget that the thrust of this is not just saving Earth, but also having Alex find his potential as a man and a Naval officer – BATTLESHIP has nothing new to offer in this regard, so the harder the character arc is hit, the less dramatic it feels. The screenplay by Erich Hoeber & Jon Hoeber has some intentionally funny lines, but alas, it has many more unintentionally hilarious concepts. The contortions made by the script to incorporate a battleship into the story are breathtaking, if ill-advised. Having the aliens lob bombs that are shaped like large pegs from BATTLESHIP the game certainly supports the tie-in factor, but also adds a level of presumably not-sought-after camp.

While it cannot be known for certain either way, BATTLESHIP has all the hallmarks of a movie created by corporate committee, with the notion of exploiting another property (in this case, the title element) tied to alien invasion, not because battleships seem remotely compatible with spaceships, but because somebody decided that aliens can sell tickets. Aliens indeed spruce up the box office, but they have to exist in some kind of context, not show up in a situation where even fantasy credibility has to stretch beyond the breaking point to accommodate them for more than two seconds without having them destroy the main characters.

BATTLESHIP has a sense of genuine respect and honor when it comes to the U.S. Navy, with a number of Navy veterans played onscreen by the real deal. Military veteran Gregory D. Gadson does very well in a large role as an Army veteran with prosthetic legs who winds up in the thick of things.

The cast and crew of BATTLESHIP strive valiantly to win us over, but it’s not nearly unique enough for us to overlook its flaws, or fun enough for us to forget about its lack of creative inspiration.