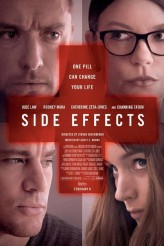 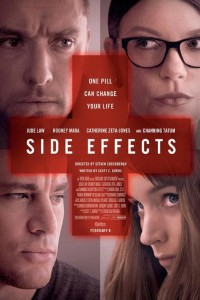 SIDE EFFECTS starts out seeming like it’s going to be a movie about a severely depressed young woman, Emily Taylor (Rooney Mara), whose life is upended once when her husband Martin (Channing Tatum) is released from prison after a stint for insider trading. Emily’s existence goes through even bigger changes she agrees to be a guinea pig for a new antidepressant. This is the set-up, but the movie turns out to be something else altogether. The side effects aren’t what we expect, literally or figuratively. There’s a specific film that this echoes, but to name that earlier thriller would be to give the game away entirely.

Indeed, to say much about where SIDE EFFECTS goes would be to spoil the fun – the best way to see the film is to go in without hearing what happens once Emily agrees to take the drug as prescribed by psychiatrist Dr. Jonathan Banks (Jude Law). Banks has his own issues – his wife (Vinessa Shaw) has just lost her job and they have a young son in private school, so he’s quite open to taking a consulting fee from a big pharmaceutical company in exchange for running trials of their new medication with some of his patients, albeit with their consent.

It may be useful to potential viewers to know what SIDE EFFECTS is not – the drug doesn’t transform people in Hulks or herald the zombie apocalypse. In other words, this isn’t a horror movie, but rather a pretty tight, smart thriller, with a canny script by Scott Z. Burns.

Mara, the mercurial title star of THE GIRL WITH THE DRAGON TATTOO, can make us ache as we observe her pain and Law is very well cast as a smooth professional who has a modicum of compassion for his patients, but who also has an eye on improving his financial picture, while not paying attention to certain key details. Tatum is fine as the loving if challenged husband and Ann Dowd is impressive as his mother. Catherine Zeta-Jones is all icy assurance as Emily’s former psychiatrist.

There is a bit of a spoiler in Zeta-Jones’ casting, as having a name performer in the role clues us instantly that she’s on hand to do more than provide the information she gives near the beginning. This will put some viewers a bit ahead of the narrative curve at some points, but most of the surprises are preserved.

SIDE EFFECTS does suffer from a problem common to a lot of thrillers, which is that it becomes so entirely enmeshed in its storytelling switchbacks that all characters become more narrative pawns than people whose fates we root for and against. Director Steven Soderbergh creates a handsome-looking piece where we can clearly understand what’s happening – no mean feat at this level of complexity – but there’s also a level of coldness that takes some of the fun away. If SIDE EFFECTS were intended as film noir, this would be acceptable, but our sympathies are directed toward one character who starts showing signs of not just understandable self-protectiveness and righteous anger, but actual cruelty. It might be different if it were at least clear that the filmmakers were deliberately crossing the line, but we can’t tell if they want to show us someone pushed past the normal limits, or if director and writer just think this is fair under the circumstances.

However, unlike a lot of other thrillers, there is braininess in all of the players here, so that we’re engaged by all sides of the equation as the stakes escalate. For those who are fond of mental Rubik’s Cubes, SIDE EFFECTS will be pretty effective.