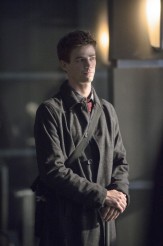 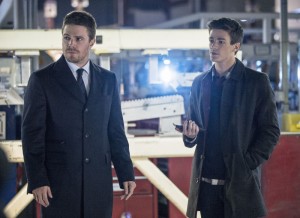 ARROW’s transformation into a show that inhabits a pure comic book universe is largely complete with this week’s episode, “The Scientist.”  The titular scientist is Barry Allen (Grant Gustin), who fans of DC Comics will recognize as the secret identity of “The Flash,” although this version of Barry Allen doesn’t appear to have made the transition into a super-powered superhero yet.  (Presumably the Starling City particle accelerator that ARROW has been teasing for the past several episodes will take care of that next week, however).  But this is the first episode where one of the villains has real super powers of any sort, and this has me a little uneasy about the direction the show is taking.  There’s no reason an ARROW can’t function well after it creates a new milieu that involves actual super people, but in their rush to throw in as many familiar elements from the comics as possible, episodes like “The Scientist” are not bringing much to the table for the fans who don’t care much about the comics and just want to watch a good story unfold.

“The Scientist” begins with someone or something unseen breaking into a warehouse at Queen Consolidated and steeling what we later learn is a large centrifuge, and mopping the floor with the security guys who are their to prevent this from happening.  This is the inciting event that brings Barry Allen to town.  He’s a crime scene investigator from “Central City” whose bosses have ostensibly sent him to investigate this robbery because it resembles a similar unsolved case in their area.

Quite naturally, Queen Consolidated’s Co-CEO Oliver Queen (Stephen Amell), who moonlights as The Arrow, is interested in this robbery too.  He and his vigilante/crime-fighting accomplices, Felicity Smoak (Emily Bett Rickards) and John Diggle (David Ramsey) are on the case right away, but are surprised to discover that Barry Allen is joining them “in house” to investigate the crime as well.  Felicity’s also “smitten” with Barry, which makes sense because he’s a kindred geeky spirit who’s also all about forensics, tech talk, and nervous tics.

Meanwhile, Oliver’s mother Moira Queen (Susanna Thompson), fresh from beating 500+ murder charges after her archenemy, Malcolm Merlyn (John Barrowman), tampered with the jury to achieve her release, attempts to re-establish herself as a part of Queen Consolidated’s leadership group.   Co-CEO Isabel Rochev (Summer Glau) isn’t having this, however, since Moira’s the least popular person in Starling City right now, and decidedly bad for business.  Oliver isn’t heeding Isabel’s warning, however, and decides that the best way to establish normalcy for his mother is to throw a lavish party in her honor.  ARROW acknowledges this is a terrible idea, as virtually no one shows up to her party, but actually it’s a really, really terrible idea and in bad taste, since they’re rubbing the city’s nose in the fact that she’s now free when so many others are dead.  ARROW wants us to know that Oliver has a blind spot when it comes to his Mom, but it unintentionally reveals he’s actually incredibly insensitive to the very people he’s committed to protecting.  It’s a reminder that this guy started out a spoiled rich kid, and apparently hasn’t shaken it completely.

“The Scientist” also has more flashbacks to Lian Yu Island, but nothing that happens there this episode is particularly unexpected.  Younger Oliver, Shado (Celina Jade), Younger Sara (Caity Lotz), and Slade Wilson (Manu Bennett) locate the Japanese WWII submarine and find the hidden super-soldier serum that’s been sitting there for sixty plus years, (and apparently didn’t evaporate or anything).  They give it to Slade, who looks like he’s otherwise about to perish from the injuries he sustained in the missile attack on the island.  Younger Sara makes it clear that the serum could kill him as well as save him, and in the cliffhanger at the end it appears that he’s died after being injected with the serum.  I can’t think of a less-suspenseful cliffhanger than this.

The problem ARROW has with the super-soldier serum driving the story in both timelines is that there’s never been anything particularly compelling or mysterious about it.  We know what super-soldier serum will do, (make you strong and fast), because we’ve seen it in a ton of comic books, movies and TV shows before, and we’ve also been hearing about it on ARROW since Season 2 began, so it’s appearance isn’t a surprise at this point.  At least Season 1 didn’t tell us that Malcolm Merlyn was building a deadly earthquake machine until the very end, and after building a steadily unraveling mystery around it.  The only reason to be similarly excited about the MacGuffin in this season of ARROW is that the super-soldier serum is the plot device that’s going to take us into the origin stories of familiar villains from the DC Comics world.  That appeals to a certain (probably substantial) chunk of ARROW’s audience, but it leaves me cold.

When Oliver, as the Arrow, ultimately fights the serum-charged Centrifuge Thief in the final act of “The Scientist,” he loses badly to the super-strong villain, and appears to be dying after being inadvertently injected with a mystery substance from some syringes.  Felicity is unwilling to take him to the hospital and risk revealing his secret identity, so, even though time is apparently of the essence, she convinces Diggle to shoot her new crush-object Barry with a knock-out dart, bring him to Oliver’s secret lair, decide to trust him with their secrets, and hope that he can use his scientific skills to save Oliver.  But this only works story-wise because we know Barry is The Flash, and his comic book reputation clears this path for him.  Any other character that this show might introduce who, by the end of their very first episode, had learned The Arrow’s secret identity, became a love interest for arguably the show’s most beloved character, and was called in to save the day at the last minute, would justifiably have fans launching arrows at their TVs.  As it is, it works, but just barely.

As usual, there are some solid action sequences in this episode, and I think Grant Gustin brings a lot of charisma and charm to his role as the future Flash, but there wasn’t much else that felt new or clever.  One exception was Moira turning the tables on Malcolm Merlyn by revealing to his former bosses at the League of Assassins that he faked his own death, making sure he’d have to scale back his ongoing harassment of the Queen family in order to run for his life.  Beyond that, “The Scientist” was an experiment in meh.