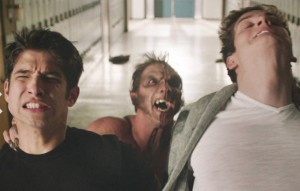 With TEEN WOLF Season 3 off and running with storylines involving a pack of Alpha werewolves and a Druid-like serial killer roaming Beacon Hills, the show is once again up to its stellar serialized tricks.

Manning the ship is showrunner and executive producer Jeff Davis who took time to discuss the latest developments for our hero wolf Scott (Tyler Posey) and his ragtag group of friends (and frenemies) who already have their hands full this early on in the season.

ASSIGNMENT X: With 24 episodes this season, will the season be broken up into two parts?

JEFF DAVIS: It will be broken up, but I can’t really say when. We have a general idea, but it won’t be a year away.

AX: What would you say the theme of Season 3 is about?

DAVIS: Season Three is about rising, maturity, responsibility and power. I would say it’s whether you rise on the merits of your will or on the backs of people beneath you.

AX: It’s obvious Scott is going to have to make some tough decisions this season.

DAVIS: Scott is learning to become a leader. You will see decisions he makes in how to be a leader and sometimes it’s very difficult decisions to make. He has to choose whether to protect one person over another. Scott’s first instinct is to save everyone and he is going to have difficulty doing that. In comparison, Derek’s first instinct is to only save his own people. It’s a little bit Professor Xavier vs. Magneto. It’s conflict versus personality and philosophy. 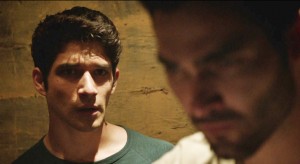 AX: Will the Alphas storyline wrap up before the break?

DAVIS: You’ll have to wait and see. What I can tell you, is I wanted to split the 12 episodes so each will be its own distinct storyline.

AX: The ratings were up when the show returned.

AX: The Season 3 premiere chewed through a lot of storytelling in an hour. Do you ever worry you’ll run out of stories?

DAVIS: We do like our show fast paced. It’s funny, we’ve been talking a lot about that in the writers room for episode 3.13. We’ve been working on the outline and just this weekend I made it a two-parter. I realized after watching the premiere episode that for 3.13 it would be a good idea to take a breath. We like to grab people by the throats pretty quick, but the pace comes down in the next couple of episodes.

AX: How has the move in shooting in Atlanta to Los Angeles been?

DAVIS: I definitely think it’s helped. It’s easier for film production in TV in Los Angeles, which is part of the reason we wanted to move here. There is so much accessibility. If you want a specific type of car, you can go to a car rental house. If you’re somewhere else, you have to have it shipped in. We shot on the Paramount lot for some of the motorcycle sequences [for the Season 3 premiere] and if you need an outlet or a plug, there’s one right there by your foot. This town was built for making movies and TV. That was one of the big changes – accessibility and ease. We did have a great crew in Atlanta as well and great locations too. I think each year we go up in production value. I’m really proud of the production this season. 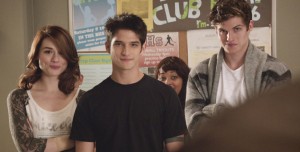 AX: I loved the idea of twin werewolves who combine to form one big one – I think it’s the most original idea added to the werewolf mythology in some time.

DAVIS: I’m an identical twin myself, part of it comes from my own life. And that hardest thing about our show is getting our actors in and out of make up. Since these two actors [Charlie and Max Carver] combine to be one character and that’s played by someone else, we don’t have to put the two actors into makeup.

AX: Colton Haynes isn’t back as Jackson. Did that happen because you ran out of storylines for him?

DAVIS: I had an idea he might not be part of Season 3 as he was auditioning for pilots during the latter half of the shoot for Season 2.

AX: Where is the rest of the season going?

DAVIS: There are going to be some epic, sweeping dramatic moments this season, more than we’ve had. Episode 6 is going to be a horror episode. It’s called “Motel California.” It’s our THE SHINING episode. We try some interesting flashback stuff in Episode 5. We’re taking risks this season thematically. This season is also about the desire for power and the rejection of power. Whether Derek wonders if that status is too soon for Scott. We have a lot of great new actors too and one of the fun things about them is that even though they’re playing villains, they’re not necessarily villains in their own eyes.

AX: Will there be blood this season?

DAVIS: Be prepared to say goodbye to some beloved characters.

AX: So you’re doing the BUFFY THE VAMPIRE SLAYER thing …