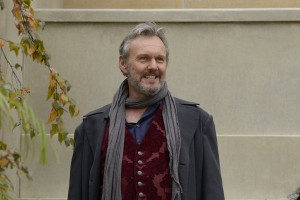 In Part Two of our exclusive interview with Syfy Channel’s WAREHOUSE 13 show runner Jack Kenny, he talks about writing for the actors and deepening the characters.

JACK KENNY: He runs into his ex on a case. His ex is a U.S. Marshal and Charlie Weber plays him. It’s kind of fun. It doesn’t feel gay or straight – it’s just, they have relationship trouble the way anybody has relationship trouble, and they just play it out, and you go, “Oh, I wish they could make it work.” But I think the difficult thing about giving our people relationships is that we don’t stay in one place. We tried to do it last season on WAREHOUSE for Pete [Eddie McClintock]. We tried to give him a relationship with a veterinarian. He’s always going off and chasing an artifact in France or Egypt or Russia, so how do you play that story week to week? There’s nothing to play, we can’t do it.

AX: Was it originally decided Jinks would be gay so that gay people would be represented, or was it so that Allison Scagliotti’s character Claudia would not have a romantic relationship with her new partner?

KENNY: That was a happy byproduct of it, because we didn’t want to do the same will-they-or-won’t-they with Jinks that we did with Pete and Myka [Joanne Kelly], because you get tired of that, and it was just more interesting. And Claudia – she’s so fabulous and meta and such a girl of her time, it felt like, “Oh, she’d have a gay best friend. She’d definitely have a gay best friend.” And so that was part of it – it was to give Claudia somebody cool to hang out with. And honestly, yeah, to have a gay character – it’s like having a black character or an Asian character – you kind of want to just weave them into the fabric and not talk about it. Yeah, Mrs. Frederick’s [played by CCH Pounder] black – not really who she is. Yeah, Dr. Abigail [Kelly Hu] is Asian – it doesn’t define her. Although we don’t ignore it – we don’t ignore the fact that Jinks is gay, we have fun with it the way he would, but it’s his fun. He’s having fun with himself, and I think that’s the way to play these characters. 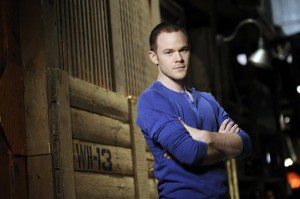 AX: What with James Marsters and Anthony Stewart Head and even Charlie Weber, who was Ben in BUFFY Season 5, you seem to be using a lot of Joss Whedon-related actors …

KENNY: [laughs] You know, sci-fi – the network Syfy and the genre – is fond of seeing faces it knows and loves. I didn’t know who Joe Flanagan was. He was in our fifth episode of Season 1 [of WAREHOUSE 13. I had never watched STARGATE: ATLANTIS, so I didn’t know who Joe was. We were showing the Claudia episode at Comic-Con, and they say, “Oh, and next week, Joe Flanagan.” The place erupts. It goes insane that Joe Flanagan is going to be on the episode. So that’s what I mean about sci-fi audiences and the genre loving familiar faces. My guess is Eddie will never have to worry about having a job again for the rest of his life after this, because he will be a familiar sci-fi face that people will be glad to see pop up on another series in any capacity. So that’s one of the reasons that we like to do it. It just feels right for the genre. We had Laura Innes come and do an episode – I guess THE EVENT gives her sci-fi cred, but I always think of her as [being from] ER. And such a magnificent actress. I said to her, “I’m glad you’re here, I’m excited you’re here, I couldn’t be happier, I’m just curious – what made you do a sci-fi cable show?” She said, “I talk to my friends who’ve been on the show and they always have such a great time, I wanted to come and have a great time.”

AX: When you were originally casting people, did say, Eddie McClintock bring anything to Pete that you hadn’t imagined about Pete?

KENNY: Well, actually, I didn’t originally cast Eddie – [teasing Eddie McClintock, who is in earshot] I would never have cast Eddie in that part. I would have cast one of the other Petes. The guy that Jinks had his arm around is probably the guy that I would have gone with. [laughs] But like I said, we talked to them about things, and Eddie is very, very supportive of the U.S. military. So one of the things we wanted to give Pete was a military background, so he was a Marine. So we definitely went into that.

Something else that we did with Eddie – [asks McClintock] Do you want me to talk about it? [McClintock indicates “yes”] – Eddie’s got eleven, twelve years in AA, so we gave Pete that background as a recovering alcoholic, because there’s a moment that Eddie plays in Episode Seventeen [of Season Four] that breaks your heart, when he talks about his last big drunk and what happened and the nightmare that that was for him, and you do something like that for an actor, and him having had similar experience as a person, it’s so much richer to watch it on film. It just comes alive and it feels real for Eddie – he doesn’t have to act, he just has to talk, which is actually the best kind of acting.

AX: Saul Rubinek, who plays Warehouse curator Artie, is sort of like a national monument in his native Canada, where you make WAREHOUSE 13 …

KENNY: Saul is a national treasure for all of us. He’s just great. He’s another one of these guys who brings so much of himself to the stage, and also, I feel like I channel him, so I’m able to write his lines pretty easily. That whole breakdown scene in Episode Nine last season, where he breaks down and he’s remembering the whole thing – he and I improv[ise]d that together. He said to me, “How do you see this scene? It just says, ‘Artie goes through the last several episodes [mentally].’” And I said, “Like this.” And I kind of did it for him, and he said, “Okay, do that again.” And I did it for him and he said, “Okay, I’ve got it.” And he started to do it, and we just went back and forth. We just had the greatest time, and that’s one of the joys of Saul, is that he will do that – he will bring – he gives you a hundred and fifty percent every time you ask him to do anything. He’s just great.

AX: Do you have any favorite episodes or moments from what we’ve seen so far?

KENNY: I guess the most moving moment for me in the series so far is when Pete died in Artie’s arms in the first episode of Season Four. And it was a scene where Pete gave his life to save Artie. Just shooting it was so moving. Eddie and I talked about it for awhile, and I told him, “You have to say goodbye. This is where you say goodbye to Artie. You don’t know if you’re going to see him again – you don’t know if this is going to be successful. You’re turning back time twenty-four hours, so you have to say goodbye. And Artie, you have to hear it – you have to hear goodbye. And this may not work.” And just that moment, that moment of Artie holding Pete in his arms and Pete dying – I’ll never forget that.

AX: Do you like being able to work on a show where you can have real goodbyes and yet keep working with your people?

KENNY: Where people can die and come back? [laughs] It is great, and it is fun to do. But on the other side of that, it is why we had to kill Lena [Genelle Williams] this year, because someone had to die who stayed dead. Otherwise, death loses its meaning, there’s no stakes to death. If anybody can come back, then there’s no stakes – there’s nothing in danger any more. So we had to lose somebody and, practically, because Lena is hard to work into stories, it felt like the right thing. Also, emotionally, because everybody loved her so much, just as an actress, as a person, as a character, and as a part of the family, it was just the right thing to do. I had a long, very difficult talk with Genelle about it, where I had to tell her, “This is what we’re doing this year, and I’m sorry, but it’s really important for the show,” and she got it, she understood. I think the best work she did in the whole series was that last scene she had with Artie in the Bronze Sector, where she was crying and hoping she was okay and she made the decision to save him, and ended up losing herself. And that was for the series – death has to be real, otherwise, there’s nothing.

AX: What would you most like people to know right now about WAREHOUSE 13?

KENNY: You know, our country went through a rough few months, Sandy Hook and what happened inBoston,Texas, and just the things that have been happening with guns all over the country and the talk about senseless deaths. And then I saw this really great Mr. Rogers quote – you probably saw it online. He said, he asked his mother once about tragedy, and people dying in situations like that and what to do about it, and his mother said, “Look for the helpers. There will always be helpers. Just look for the helpers.” To my mind, that’s who our people are. They’re the helpers. They’re the people whose job is to make it right. Our characters’ job is to help people. And that’s what I love – that’s one of the things I love about the show. It’s not violence for violence’s sake, it’s not guns and shooting, it’s helping. I think that expression, “ruining the world’s day,” has come up a lot lately. How do we help people, how do we keep the peace, how do we keep these things from ruining the world’s day?