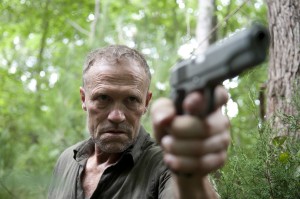 In the sixth episode of THE WALKING DEAD Season 3, “Hounded,” Michonne (Danai Gurira) begins a one-woman war on Woodbury while Andrea (Laurie Holden) wants to become a contributor to the community. But she soon finds that although she condemned the Governor’s (David Morrissey) brand of entertainment, bloodlust may be something she shares in common with the fighters in the arena. Meanwhile, Rick (Andrew Lincoln) has some phone conversations that may provide salvation for his group — if they’re real. And if they’re not – if they’re voices from the past instead – does that mean Rick has finally lost his mind?

As we gear up for the mid-season break, there’s still a sense as there was last week of slowing down on all fronts, but after such a devastating loss two weeks ago, it feels reasonable to take a look around, watch the effects on everyone as well as the developing situation at Woodbury, and gear up for what is surely going to be another peak in a week or two. That still leaves us with a slower, quieter episode, but that is not to say there’s isn’t plenty of eventful storytelling, as well as the now usual bits of carnage for people that want to get their quota of zombie action. In fact, in one sequence it becomes an important plot point when Michonne learns a tactic that Rick and Glenn (Steven Yeun) knew a long time ago – zombie blood and guts disguises the living from the Walkers.

And just when it seems the most important moment is going to be the Governor and Andrea discovering their mutual appreciation for battle – and each other – things take a drastic turn as Merle (Michael Rooker) gets the drop on Glenn and Maggie (Laurie Cohan) and takes them to Woodbury. Their only hope? Michonne, who saw the whole thing and makes it to the prison just in time to meet Rick amid a crowd of Walkers at episode’s end.

It’s a nice touch that last week and this, Andrea decries the brutality of the Woodbury arena only to leap off the wall and gleefully get up close and personal with a zombie herself. As the young girl guarding the wall with Andrea says, this isn’t a game, but clearly Andrea is discovering her inner Governor. As for Philip, I’ve been pretty forgiving of the TV incarnation of the Governor lately. We know he’s still likely to be the “big bad,” but this version is much more persuasive and nuanced while Merle seems to be shouldering more of the obvious villainy. I still wonder how far this Governor is going to go as compared to the comic book source, but by this episode’s end we do indeed see more of his deceptive and manipulative side. Right now though, I’d be much more nervous with Merle on my trail then the whiskey-sipping, soft-spoken leader of Woodbury. Then again, Merle’s threat is obvious; isn’t the one couched in eloquence and empathy far more deadly?

I still can’t help but feel that much of Michonne’s behavior toward Woodbury, including her “Biter-gram” rebus challenge and slaughter of some of its living members, only makes sense if she already knows where it’s all headed. Even then, did a couple of Merle’s companions deserve to die? They don’t all seem fully aware of what the Governor and Woodbury might really represent, which could make Michonne more of a murderer than perhaps she should be. And please, enough with the constant scowl. Can you come up with one other expression, just one? Thanks in advance.

Back at the prison, there’s a touching scene with Daryl (Norman Reedus) and Carl (Chandler Riggs) as well as a welcome reunion when Daryl learns they were just a bit hasty in their estimation of how many were lost in the prison massacre. Hershel (Scott Wilson) also reaches out to Rick as a surrogate Dale (former cast member Jeffrey DeMunn) while their erstwhile leader keeps taking phone calls that slowly reveal he’s hearing voices in his head. It seems a bit too easy for Rick’s entire sojourn into insanity to last less than the space of one episode, to find his strength again that quickly and properly meet his newborn baby (if it’s even his), but we’ll see how it all goes.

Next week, Glenn and Maggie face the wrath of Merle and the Governor; it’s not likely to be pretty.