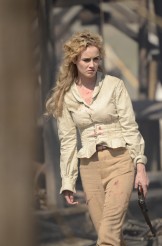 A slate cleaning 2 hour finale in which some do not get out alive! 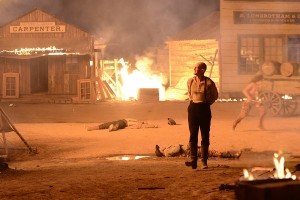 There are game changers and then there are season finales that level the playing field. HELL ON WHEELS in its two-hour finale of “Blood Moon” and “Blood Moon Rising” is establishing that no one on this series is safe except perhaps Bohannan (Anson Mount), since the series is from his perspective for the most part. Besides him, anyone can die, and the stakes can change overnight for the citizens of the town struggling to build the railroad west.

I’ve thought this whole season that Swede (Christopher Heyerdahl) and his many plans and machinations, since being deposed from power at the end of season one, would cause all kinds of problems and ramifications for the other characters on the show. Boy Howdy. I had NO idea that his shiftiness was going to lead to the virtual destruction of the town and the death of one of my favorite characters. Bohannan should’ve put a bullet in him when he had the chance. I’m sure now the character is going to be ingrained with an even deeper sense of loss and regret, and I wonder if this will make Bohannan a less likeable man next season?

So the town burns. Pretty much every wood structure is lost and everything that has been built over the last couple of seasons is ashes. The good news is the bridge is still standing so the railroad can continue forward. Sadly, Lily (Dominique McElligott) will not be there to head up the construction as she had hoped, since the Swede decided to kill her to hurt Bohannan one last time. Since Lily sent documents proving that Durant (Colm Meaney) was faking his mileage on the railroad construction; he’s under arrest and board has turned to Bohannan to take over.

That’s a hell of a journey for Bohannan to have made in two seasons of this show. He came to hell on wheels looking for revenge against the men that had killed and violated his wife, at the end of last season he ran off after killing an innocent man, then at the start of this season he was an outlaw robbing trains. So to have him in charge of everything starting out next season, that’ll be a really interesting leap to see the character make. Maybe this means he’ll start washing his hair a bit more regularly.

Is the Swede dead? That’s a difficult question. He escaped being hung from the bridge by Bohannan, but he also took a header into a very shallow creek, and the shot of him floating along did not look like he was alive and well. Of course, it’s TV so you never know. He might return to devil the town again further down the line.

Elam (Common) and Eva (Robin McLeavy) survive the destruction of the town and the burning of his newly built cabin by the river, and now Elam is going to have the job Bohannan had this season of being the boss’ right hand man. Now it remains to be seen whether or not the baby is his or the recently deceased Mr. Toole’s (Duncan Ollerenshaw). When Mr. Toole decided to end it all I was somewhat surprised, but I guess taking a bullet to the head the second time did the trick and now he’s removed himself from one of the messed up love triangles on the show.

Sean (Ben Esler) and Mickey (Phil Burke) McGinnes are both still around, but since the town burned who knows what they have left going for them. Sean is still dangerously obsessed with Ruth (Kasha Kropinski), and I feel like he might kill or rape her if she doesn’t consent to being his wife soon.

So LOTS of changes, lots of folks to bid farewell to, some new opportunities for some characters, and an entire town to rebuild; there’s plenty to wonder about between now and the next season of HELL ON WHEELS so we’ll just have to wait and see what comes next!

Leave a Reply to Matthew Hetman