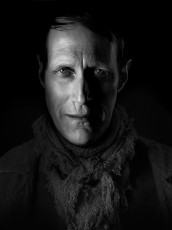 The actor talks the Swede's trajectory 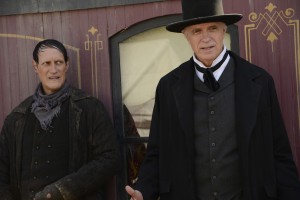 HELL ON WHEELS is both the title and the setting of AMC’s drama, Sunday nights at 9 PM, about the muddy post-Civil War settlement where the first U.S. transcontinental railroad is being built in 1865. The place is full of crime, murder and desperate characters.

One of the hardest-luck cases in this hard-luck environment is Christopher Heyerdahl’s character Thor Gunderson, known to all as “the Swede,” even though he’s really Norwegian. In Season 1, the Swede was head of security in the encampment, but in Season 2, he’s been demoted to collecting the bodies of the dead.

Heyerdahl hails from British Columbia, Canada, but he’s demonstrated a gift for all sorts of accents in any number of roles – besides the Swede, he’s recently done German for his role as Dieter, the Authority vampire in Season 5 of TRUE BLOOD and British as John Druitt/Jack the Ripper and Bigfootian as the Big Guy in two different roles over four seasons of SANCTUARY. He was also the demon Alistair on SUPERNATURAL and Todd the Wraith on STARGATE: ATLANTIS, among many other credits.

At a party held at the Paley Center for Media in Beverly Hills for the second-season premiere of HELL ON WHEELS, Heyerdahl takes some time to talk about the Swede and a few of his other characters.

ASSIGNMENT X: You actually have a Canadian accent in real life. Do you have a facility for doing accents for people from elsewhere, or do you have to really work at it?

CHRISTOPHER HEYERDAHL: Well, I guess you always have to work at it. Whether I have a facility for it or not is dependent upon the ear that is listening.

AX: How would you describe where Thor Gunderson is at in HELL ON WHEELS Season 2?

HEYERDAHL: Well, at the beginning of the Season 2 premiere, we find the Swede and he is now fallen – he’s got the lowest and the worst job that you could possibly have in Hell on Wheels. In Season 1, he had, I would say, the best job. So that’s how far he’s fallen. You can’t fall any further in Hell on Wheels and still be living there and surviving there.

AX: So are you charting the depression of the Swede?

HEYERDAHL: I would say I’m charting the trajectory of the Swede. He’s like a great chess player and he is plotting the long game.

AX: Where is your character at the end of the Season 2 opening episode?

HEYERDAHL: It’s funny, because it’s difficult to remember where one episode ends and another one begins. That’s the great thing about this series, is that [the episodes] really do flow so well together. They’re not book-ended at all. So it’s really about watching a season, as opposed to a single episode. If somebody comes in to the middle, they’re going to have a hard time without seeing Episode One to wherever they are.

AX: And how did you enjoy your tenure on TRUE BLOOD?

HEYERDAHL: I loved it. I absolutely loved it. It’s a great group of people. It’s wonderful – it’s very rare that you actually get to shoot for fourteen days, shoot on film, do it with a group of people who are so well entrenched in their characters, everyone is calm, the writers are allowed to do what they do, the directors are allowed to do what they do, the actors are generous, it’s wonderful to go to set – I can’t say enough good things. So it was a fantastic time.

AX: Your erstwhile SANCTUARY colleagues, star/producer Amanda Tapping and supervising producer/writer Gillian Horvath, are both now working on the rampaging dinosaurs series PRIMEVAL: NEW WORLD, with Tapping as a director and Horvath as executive producer. It’s shooting in Canada. Are you doing anything on that show?

HEYERDAHL: No, nothing – except adore Amanda and Gillian – it’s her baby – and really support it from afar.

AX: How are you enjoying your visit to Los Angeles?

HEYERDAHL: I had a wonderful walk through Los Angeles. And it was a beautiful breeze, the temperature was perfect, the people were friendly – I actually went to a little block party where they had a bouncing castle set up. It was so much fun.

AX: Anything else coming up professionally?

HEYERDAHL: I’m actually too busy to be doing anything other than HELL ON WHEELS. I went straight from TRUE BLOOD [back] to HELL ON WHEELS and now I’m just looking forward to a little vacation.