cabin in the woods ending

©2012 Lionsgate
Fran Kranz in THE CABIN IN THE WOODS
Interviews

Exclusive Interview: Fran Kranz on the CABIN IN THE WOODS climax 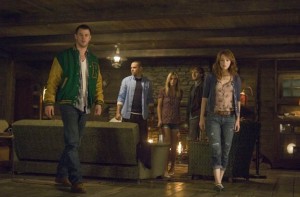 Chris Hemsworth, Jesse Williams, Anna Hutchinson and Fran Kranz in THE CABIN IN THE WOODS | ©2012 Lionsgate

CABIN IN THE WOODS, the horror film written by Joss Whedon, who also produced, and Drew Goddard, who also directed, just hit Blu-ray and DVD. It opened theatrically in April of this year, having survived the collapse of original production entity MGM to subsequently be picked up for distribution by Lionsgate.

Back in April, we interviewed Fran Kranz, one of CABIN’s stars, about the movie. Kranz worked on CABIN between the two seasons of Whedon’s TV series DOLLHOUSE. In DOLLHOUSE, Kranz played Topher, a techie genius who had a nervous breakdown when he found that his work was largely responsible for causing an apocalypse. More recently, Kranz costarred in Whedon’s modern, black-and-white film version of William Shakespeare’s MUCH ADO ABOUT NOTHING, which had its premiere at the Toronto International Film Festival and has been picked up for release by CABIN’s distributor Lionsgate.

The following quotes were not included in the text of ASSIGNMENT X’s original CABIN IN THE WOODS interview with Kranz, because they discuss the climax of the film. They are spoilers – big, honking how-the-movie-ends and why it ends that way spoilers – so if you haven’t already seen the movie and don’t want to be spoiled, don’t read this interview with Kranz. 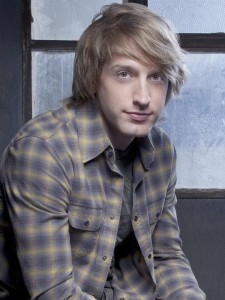 Okay, and with that, we remind you that, in CABIN, Kranz plays Marty, a stoner who is very smart and very committed to his friends. That commitment faces something of a crisis when Marty’s beloved friend Dana (Kristin Connolly) is told that if she doesn’t kill Marty, the world will end in eight minutes. Dana aims a gun at Marty and Marty fails to warn Dana of an approaching werewolf. The werewolf attacks, Dana gets mauled, Marty shoots at the werewolf, a few other things happen, and Marty and Dana, both badly wounded, sit together (ala John Carpenter’s THE THING), apologize to each other and wait as the world begins to end.

Speaking by phone, Kranz gives his thoughts on these matters.

ASSIGNMENT X: You’ve said that one of Marty’s strong points was his loyalty –

AX: And at the end of CABIN, that loyalty falters a little bit. What’s your take on Marty’s thought process at that point? He winds up saying, “I’m sorry I let you get bit by a werewolf and ended the world.”

KRANZ: Yeah. Yeah, yeah, yeah. That’s interesting, because we talked with Drew about that a lot. For awhile, I wasn’t so convinced that Marty saw the werewolf, and that he’s saying “I’m sorry, too” just to Dana, that he’s ready to accept his fate. But Drew said, “No, he sees the werewolf, that’s the line and it’s just that moment where they do break under all that.” And I think as much fun as the character was, I’d really tried to make him real, and that’s where the idea of the loyalty came from, is that you’ve got to hold onto something that you can empathize with and something truly human. The slacker/stoner thing’s a lot of fun, but at some point, he’s got to be a human being, and that is an emotional moment and that is unfortunately sort of a breakdown in their friendship. And she raises the gun and he doesn’t warn her about the werewolf. That was an emotional day, that was an emotional scene. For how much fun the movie was, we really played that stuff and I think there were some real tears and it’s a tough moment where the bond breaks, but the stakes couldn’t be more extreme, so I think that they quickly forgive each other, and it’s only moments later that Marty’s shooting that f***ing werewolf, so whatever. [laughs]

Basically, I only had about three bullets in that gun, but they keep cutting back to it and repeating footage, so it looks like I shoot it six times, when in fact, on set, I didn’t. Lionsgate and Drew and Joss, they got back at that werewolf. It’s good. It’s satisfying, all the bullets I put into it. I noticed that. It was more than I actually shot on set. So it was great. They just used the footage twice. It’s actually the same shot – you just wouldn’t notice it. It’s just juxtaposed well, and so I have the shot of me shooting the gun, and it cuts to Dana, and it cuts to the werewolf being shot, and it comes back to me and it’s the exact same shot. You just would never know. So it appears that I’m shooting more bullets into it than I actually did – they reused the footage.

AX: Are you happy with the overall movie?

KRANZ: Oh, yeah. One hundred percent. I love it. I thought it was one of the best scripts I’d ever read and I think it’s just one of the coolest movies I’ve ever seen, I really do. [laughs] I can’t tell you enough about it.

TO READ PART 1 and PART 2 of AX’s exclusive Fran Kranz interview, check out the links below

Related: Exclusive Interview with THE CABIN IN THE WOODS and DOLLHOUSE star Fran Kranz – Part 1

Related: Exclusive Interview with THE CABIN IN THE WOODS and DOLLHOUSE star Fran Kranz on MUCH ADO ABOUT NOTHING and DEATH OF A SALESMAN – Part 2

Article Source: Assignment X
Article: Exclusive Interview with Fran Kranz on the climax of CABIN IN THE WOODS