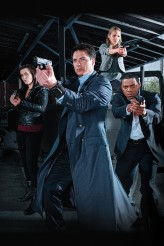 In the premiere episode of the all-new BBC/Starz co-production of TORCHWOOD: MIRACLE DAY, Oswald Danes (Bill Pullman) is an unrepentant pedophile set to be executed, but when he miraculously survives it’s only the beginning of what the world calls “Miracle Day.”

Suddenly and for no apparent reason, death ceases to have a hold on all of humanity (animals and insects not included, mind you). CIA agent Rex Matheson (Mekhi Phifer) survives a lethal car accident while his colleague Esther Drummond (Alexa Havins) investigates a strange defunct UK organization known as the Torchwood Institute, bringing her face to face with its former leader, the enigmatic Captain Jack Harkness (John Barrowman). Jack insists his team is all but gone, but there appears to be a connection between a mysterious e-mail about Torchwood and the last reported death on Earth. Meanwhile, Jack’s old friend and partner Gwen Cooper (Eve Myles) discovers that it isn’t easy to bury the ghosts of the past…not when they refuse to die.

There were a lot of TORCHWOOD fans eagerly awaiting this return following the superb third series from two years ago, TORCHWOOD: CHILDREN OF EARTH. That anticipation also came with a host of fears, since show runner Russell T. Davies and the BBC have partnered with the US network Starz to co-produce the series and bring in a far more international cast and settings than the Cardiff-based show featured in its first three years. But fans, worry not: This is still very much the TORCHWOOD you love – hell, even Andy (Tom Price) is back, promoted to Sergeant, and Gwen’s parents are also played by the same actors – but with a scale and production values that almost make the use of terms like “epic” warranted. There’s even a nice nod to the original theme music throughout.

Still, this first episode feels just a bit slow from time to time, but there’s time to get everyone in place and set the stage for a ten-week storyline. The premise is also a good, solid science fiction springboard: What happens if no one dies? Not succumbing to any zombie clichés while still referencing the basic notion, this story instead just proposes that the mortality switch has been thrown and everyone is safe from death in any shape or form. But when Jack discovers that he can be wounded, does this mean that everyone has gone “Captain Jack” on us just as the immortal man himself has returned to normal?

Jack is immortal, you say? Well, for those just joining the TORCHWOOD saga, all the pre-debut hype about this being crafted as a “jumping on” point for new viewers was pretty accurate. While not at all a reboot, this story manages to continue directly from the previous series while approaching from a fresh angle with a cast of characters that can encounter the Torchwood team (such as it is) and thus introduce the audience to them through new eyes. One wonders though how much Jack’s omni-sexual attitude will be on display in this series. In this debut episode, there isn’t a single cheeky reference, but we have weeks to go yet.

Perhaps because American audiences are used to seeing great cliffs and rolling green romantic hills as indicative of UK countryside, when we reunite with Gwen and Rhys (Kai Owen) they’re living in a postcard-perfect retreat, presumably the better to get away from memories of all those rain-swept Cardiff streets filled with aliens and protect their baby daughter. Naturally, circumstances conspire to draw them back into the action and to the US instead of Wales, or as Rex calls it, “the British equivalent of New Jersey.” Truthfully though it’s never looked better, from the sweeping shots of the Coopers’ cliff-side cottage to the dusky expanse of beach in the episode’s climactic chase.

As for the cast in this installment, Pullman’s performance in particular is mesmerizing with his halting speech and tendency to look at people from one side of his face. Dane’s release at the end of the episode sets up the potential for a lot of moral and ethical issues to play themselves out over the next nine episodes in much the same way CHILDREN OF EARTH provided a platform for exploring subjects not normally seen on television, sci-fi or otherwise. Between the survival of a loathsome sex offender and murderer to the possibility of massive overpopulation and the breakdown of society as humans war for food and living room, who knows where this series will lead by the time we get to episode ten? Speaking of CHILDREN OF EARTH, the cover-up of that incident presumably affected the entire world since the “456” regulations are part of UK and US law; nice touch.

TORCHWOOD was always intended to push boundaries, and although they didn’t always go as far as they seemed to want viewers to think, there are moments where things get pretty strange and gruesome. The decapitation of the remains of a still-living explosion victim is a skin-crawlingly superb set-piece. Try to hold down your dinner while watching this part and you have my respect.

At episode’s end, Rex has pressed the Torchwood survivors into service under his command, and the chase is on to hunt down Death and restore order to the universe. But even Rex is no angel; our first glimpse of him before his accident had him laughing about a colleague’s cancer-stricken wife because it meant a promotion opportunity for him. Are we worth saving? Let’s find out!