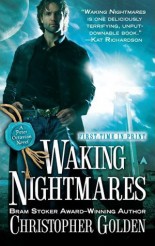 Novelist Christopher Golden began the series collectively known as THE SHADOW SAGA with OF SAINTS AND SHADOWS, published in 1994. There has been a substantial gap between the fourth tome, 2003’s THE GATHERING DARK, and the present. Now Golden has brought forth a new installment, WAKING NIGHTMARES, which should appeal equally to fans of what has come before and readers plunging into this world for the first time.

Peter Octavian is a former vampire and current wizard whose successful efforts to save the world have ironically led to a thinning of the barriers between other magical realms and our own. After an outbreak of some bad Earth magic in San Francisco, Peter and his witch friend Keomany Shaw are drawn to the small coastal town of Hawthorne, Massachusetts, where all hell is starting to break loose. Joined by a nervous young vampire and a sensitive college student, Peter and Keomany try to figure out what is going on here before a supernatural beachhead can be established that may destroy the world.

Golden makes the stakes suitably high and intertwines a variety of sympathetic protagonists – many of whom don’t survive to the finale – the better to cover a great deal of ground. His use of folklore is both knowledgeable and inventive, and he creates some well-set-up surprises within the intricate framework. There are some similarities here (unintentional, as the books seem to have gestated at the same time) with Stephen King’s DUMA KEY. In the past, some of Golden’s Octavian adventures have delved into other dimensions with Lovecraftian overtones (if Lovecraft had ever put characters we really liked in peril). With its initially mundane setting, WAKING NIGHTMARES resembles what a Stephen King book might be if the “Hmm, how weird”/”I wonder what’s going on”/”This can’t be supernatural”/”Holy s***, it is supernatural, now what do I do?” sections were eliminated and the whole thing cut to the chase from the outset.

Octavian himself is an enjoyable character, powerful but not omnipotent, wise but not infallible, with a good soul. Keomany’s love of the Earth is affecting and Golden puts it in a context where we understand how the character’s connection to her faith enables her unique abilities.

There are also a satisfying varieties of textures here, from the stifling lethal greenhouse within a San Francisco mansion to the ferocious ill winds blowing no good across Hawthorne. Golden details his scenes so that we can envision what’s going on, without losing focus on characters and narrative.

Whether a reader has been waiting for Peter Octavian’s return or just wants a good horror adventure, WAKING NIGHTMARES is a satisfying read.