CD Review: ZOMBI 2 / A CAT IN THE BRAIN soundtrack 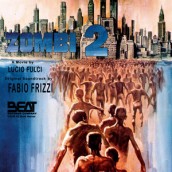 CD Review: ZOMBI 2 / A CAT IN THE BRAIN soundtrack

Where rock fans stateside were grooving the progressive rock of groups like Emerson, Lake and Palmer, Italian horror auteurs were using the guitar and synth vibes for far bloodier ends. And if Dario Argento was linked at the hip to the rhythmic murder operas of Goblin in DEEP RED, SUSPIRIA and DAWN OF THE DEAD, than the infinitely gorier Lucio Fulci was joined in the intestine to the creepily mod sound of Fabio Frizzi for such infamously stylish splatterfests like THE BEYOND, CITY OF THE LIVING DEAD and MANHATTAN BABY.

Now Beat Records has paired Frizzi’s scores from two movies drenched in Fulci’s grey matter, beginning with ZOMBI 2. With a title that shamelessly capitalized on DAWN OF THE DEAD Italian one, Fulci’s nastily effective movie got his biggest U.S. release under the name of ZOMBIE, a movie equally unforgettable for its eye-piercing gore as a poster that screamed “We Are Going To Eat You!”

Frizzi’s score mostly uses tropical percussion to play the island’s human banquet, his beat ranging from Club Med-style dances to eerily percolating grooves and voodoo drum ceremonies. But the one bit that truly makes ZOMBI 2 stand out is Frizzi’s haunting main theme where moaning voices joining with organ-like beats and synths. It’s a melody that packs the kind of evil syncopation that, along with John Carpenter’s HALLOWEEN and Fred Myrow and Malcolm Seagrave’s PHANTASM, stands for all that embodied the dark catchiness of the late 1970’s horror theme.

Skipping ahead to 1990’s A CAT IN THE BRAIN, Frizzi has obvious fun for a movie where Fulci essentially plays himself, a director driven nuts by his own gory excesses to carry out murders in “real’ life. Frizzi crafts a typically catchy synth-rock theme before hearing black humor with soused ragtime, disco funk and the kind of tinkertoy / child voice lullabye that signals madness better than a vacancy at the Bates Motel. And if you think you’ve Edvard Grieg’s “Hall of the Mountain King” to death, then Frizzi’s pipe organ version might be the nuttiest spin so far of this classical chestnut. ZOMBI 2’s voices also show up again to catchy effect, a quivering chorus joining with strings for another ghastly effective theme that once again shows how rock music was the gateway drug for some of the better cult horror composers like Fabio Frizzi.

Click on Link: To purchase ZOMBI 2/CAT IN THE BRAIN soundtrack