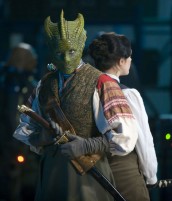 A good series goes to pot in the mid-series cliffhanger.

In the DOCTOR WHO Series 6 mid-year cliffhanger, the Doctor (Matt Smith) and Rory (Arthur Darvill) rush to save Amy (Karen Gillan) and her newborn baby Melody, walk right into a secret base and rescue them immediately, but whoops! The baby is a Ganger, the enemies have escaped with the real one, and River Song (Alex Kingston) shows up to tell everybody that she’s Melody all grown up. The Doctor giggles like a schoolboy at the revelation that he’ll one day be smooching Amy and Rory’s daughter, then runs off and leaves his companions gape-mouthed in anguish and confusion…much like the audience that just sat through this 50-minute episode with five minutes of what you might call a ‘story.’

First, let’s talk about what’s good. The episode looks wonderful and the cast is fantastic, with the guest stars rising above their sketchily-drawn characters. As for our leads, this may be the finest moment combined for Smith, Darvill and Gillan, with even Kingston moving beyond her usual one-note smugness when she first meets Rory outside her prison cell. The brief inclusion of the Cybermen, utilizing them as just part of a larger universe rather than the central threat, is a nice addition. That leaves us with the script, which seems to be telling any viewers that would dare to expect a story to make sense that it doesn’t respect them in the slightest.

Let’s deal with the Doctor’s anger first, which he marvels at as “new.” It really isn’t. We’ve seen the Doctor far angrier and about far more universal threats in many classic episodes; Tom Baker raged with the best of them. Even if you want to argue it’s new for Matt Smith’s incarnation, ol’ Eleven was as angry in “The Beast Below” and “The Doctor’s Wife.” As for his crushing recognition that others perceive him as a warrior rather than a healer, Davros already covered that ground far more elegantly in “Journey’s End.” On top of that, a future River once reveled in describing this kind of Doctor, and now she’s confronting him about it as if it’s a bad thing. So this whole attempt at an exploration of the Doctor’s character is very muddled.

We’re also given no emotional context for the army the Doctor gathers to help him since most of them are characters we’ve never even met before or only briefly. The soldier that once met him (Christina Chong) seems sweet, Dan Starkey’s Sontaran nurse is great fun, and fandom in general instantly took to the samurai sword-wielding Victorian Silurian lesbian detective (Neve McIntosh) and her sidekick/lover (Catrin Stewart). That’s not surprising; put a weapon in a female character’s hand, and she’ll have a fan club and several thousand pages of fanfic posted about her within an hour of her debut. But they aren’t characters, just a collection of attributes with cool costumes.

As for the other side of the equation, our main threat comes from a sinister woman in an eye patch who has previously been glimpsed throughout the season but who we’ve never really met before. We’re not told what her motivation is for hating the Doctor, nor do we get any idea why the army working with her is against him either. In their only previous appearance last year, members of this same army seemed willing to work with him, so were they from this group’s past or future?

Then, after training relentlessly to face him, the Doctor saunters into their line of fire and they promptly behave like morons, fighting with their Headless Monk allies and disarming themselves while chanting “we are not fools;” I disagree. And those Headless Monks? Easily the most ludicrous monsters ever created for the show, and I’m including the Myrka. By the way, the Ring Wraiths called and they’re planning to sue.

I hear what some of you are saying: We’ll find out more about all this later this year, the story isn’t over yet, it’s all set-up for the fall. Are we certain all these narrative gaps will be addressed? Perhaps they will, but that brings me to a bigger issue with this episode and the arc in general: Deferred satisfaction.

When I sit down to watch an episode of DOCTOR WHO, it’s not because I want it to entertain me next week or months from now; I’m watching it to be entertained with a coherent story today. There’s nothing wrong with an ongoing arc, but you can’t keep deferring answers and piling on new questions without delivering on something. True, you can’t please everyone, but you’ll never please anyone if instead of answers, you keep saying “Um…er…look over there, another mystery! Ooh, kittens!” That’s showing little regard for an audience that is already emotionally invested in the series. It’s not much to ask that it makes sense and reaches a conclusion once in a while. And yes, we do get an answer in the form of a final ‘shocking’ reveal; the problem is that it’s an answer to a question we’ve never asked.

When River Song was first introduced in 2008, the mystery about her character was simple: Is she the Doctor’s future wife? When she returned for the first time last year, new questions were added: Why is she in prison, and who is the “good man” that she kills? Never in all this time have we been burning to know who her parents are, because it doesn’t matter. This ‘surprise’ also introduces tons of inconsistencies in the way Kingston has played the character in the past, but that just means it’s at home in this mess of an episode.

Like a lot of “epic” new series stories, this episode also spends more time telling us how amazing everything is rather than letting the story be amazing on its own terms. Why bother crafting a moving or thrilling tale when you can just have a character recite a pretentious, overwrought poem over slow-motion Michael Bay-like action or make a speech about how high the Doctor is rising or how much further he’ll fall? And again, we’ve seen him rise much higher than this (even in this era’s own “The Big Bang”) and as for falling? I think “The Waters of Mars,” for all its own flaws, has that covered.

Aside from the more profound issues, there are lots of momentary annoyances throughout. The return of the space-faring Spitfires from “Victory of the Daleks” is a demoralizing bit to be sure; who wants to be reminded that episode even exists? And in order to fake us out (again) on Amy’s opening speech so that we’ll think she’s talking about the Doctor instead of her husband, she awkwardly refers to Rory as “the last of his kind,” except in this remade universe he’s not the last of anything by any stretch of the imagination. He wasn’t even called the Last Centurion last year – it was the Lone Centurion. Can’t this show even get its own recent continuity right? And if it knowingly jettisoned accuracy for the sake of cheap misdirection, that’s even worse.

As a dedicated fan stretching back to the classic days, I’ve rarely felt like I’m losing faith in the ability of the show to entertain me, but I’ve gotten as close to that feeling this week as I’ve ever been. And yes of course, the fall episodes may very well address most of the aforementioned gaps, which would be truly wonderful. But even if they do, that doesn’t change the fact that here and now, this episode is disjointed, disappointing, and not the “game-changing” cliffhanger it claims to be. When Series 6 comes to an end in a few months, hopefully we won’t be left with one last question: How convoluted or elongated does a story arc have to get before it’s worth rethinking that approach and just telling us some stories? Down that road lay LOST and THE X-FILES, and no one wants that.

Next time…well, there isn’t one yet. I’ll be back here in the fall when DOCTOR WHO returns with the amusingly-titled “Let’s Kill Hitler!” Until then, go forward in all your beliefs etc. etc. Abusive comments and tirades about how I “didn’t get it” can be typed below.