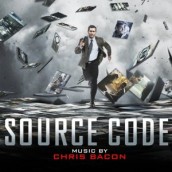 Composer Chris Bacon has certainly picked up some mad skills by working with James Newton Howard on such scores as KING KONG and THE DARK KNIGHT. And his own talent was readily apparent when he gave SPACE CHIMPS a score that played them like Apollo 10 astronauts.

When CODE’s mad science nature kicks in, Bacon adds electronic percussion into the mix, but in a way that always keeps a melodic human core at its center over a special effect vibe, even if there’s a helping of BOURNE rhythm to it action runs- which aren’t nearly as plentiful as you might think. An always-intriguing listen, SOURCE CODE translates into a clear message to keep an ear out for Bacon’s musical development, one that might very well end up putting him in Howard’s league with this cool, and accessible example of future-past scoring.