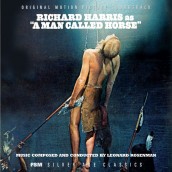 From the emotionally turbulent breakwaters of EAST OF EDEN to the experimental innards of FANTASTIC VOYAGE and the primal tones that lay BENEATH THE PLANET OF THE APES, Leonard Rosenman continues to stand as the harbinger of applying avant garde techniques to film scoring- music whose clash of Stravinsky-esque dissonance with traditional melody was just as suited for the concert stage as it was a movie screen.

So when given the task of applying a truly authentic American Indian sound to this classic 1970 wilderness adventure, the last thing Rosenman was going to do was go for the soaring, symphonic melodies practiced by so many other white men, with just a tip of the hat to “injun” rhythms. Instead, Rosenman dug deep into native ceremonies and chanting for music that would represent the culture clash, and ultimate understanding that comes from a tribe and their captive Englishman. The result is a striking mix of noble orchestrations with native voices and percussion, music that at once conveys the beauty and tenderness of the Indian’s natural world, while also portraying its seeming savagery, particularly in the grueling, modernistic music for HORSE’s notorious “Sun Vow” ritual.

Film Score Monthly’s powerful release not only releases Rosenman’s unabridged score for the first time, but the Indian dances that gave the composer the inspiration to write a true “western” score, a soundtrack that remains one of the most striking meetings between melodically “advanced” technique and music that goes back eons before orchestras existed.

Click on Link to Purchase: A MAN CALLED HORSE soundtrack