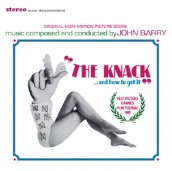 John Barry was surely one composer who had this score’s titular gift as he prowled swinging 60’s London with best mate Michael Caine. So it’s a given that his score for this surreal 1965 film about a lad hunting for English birds would get the clever, lush bounce that Barry used to impress an audience far bigger than the era’s lovely ladies.

Arguably the best score to make use of the composer’s free-style jazz origins with The John Barry Seven, and definitely more mature than the sexed-up teen pop energy he gave to his first score for BEAT GIRL, THE KNACK is all about its sensual strut. No one could combine the worlds of the Soho nightclub scene with the sound of a scoring stage with Barry’s inimitable sound, or melodic beat.

As always, the theme’s the thing for THE KNACK, and it’s a gorgeous, popping rhythm carried by jazz combo, electric organ and siren-like voices, which are then given a bit of the orchestral danger that Barry was playing at the time for a bloke named Bond. Not only does Barry effortlessly catch the pace of the girl chase (even playing it with the speed of a silent movie for director Richard Lester’s surreal approach), but he also understands the haunting emptiness of always being of always being on the make. There’s a lot of love in this new KNACK, which has been superbly re-mastered, and given copious, fascinating liner notes from Barry experts Geoff Leonard and Pete Walker (authors of the “John Barry- The Man with the Midas Touch”).

THE KNACK is prime Barry, a jazzy example of why this late composer’s always-thematic appeal will remain eternally listenable, not to mention great music to put for scoring with the Soho ladies.