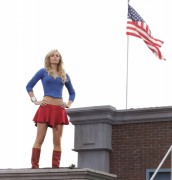 The return of Clark’s cousin stirs up a huge inferiority complex in a solid story about identity, doubt and the Darkseid 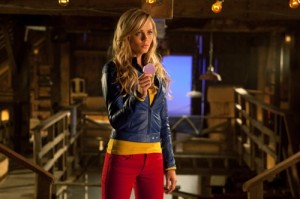 It’s been awhile, but Clark Kent’s cousin Kara (Laura Vandervoort) returns to SMALLVILLE in “Supergirl” and guess what? Yes, she can now fly – much to Clark’s surprise. Jor-El has entrusted Kara with a task – to stop a dark force heading to earth. He felt Clark might get infected if he got too close.

This dark force (Darkseid) has already taken possession of a small-time radio host and superhero hater Gordon Godfrey (Michael Daingerfield). Using this mouthpiece to spread doubt and hate against the heroes, the episode focuses on Godfrey’s meteoric popularity rise in three short weeks.

Meanwhile, Lois (Erica Durance) is back in town and still harbors feelings for Clark – even though she knows he’s the Blur, but Clark, with all his super powers, still has no clue that she knows.

When Godfrey reveals to Lois that he knows Oliver Queen (Justin Hartley), her former boyfriend is the Green Arrow and he’s going to reveal it to the world, she has to find a way to stop Godfrey.

Lois first warns Oliver, who decides it’s time to come out from the shadows and reveal that he’s the Green Arrow (this is done in a similar way that Tony Stark revealed he was IRON MAN in that film, but in a less cocky and more somber way).

By episode’s end, Clark discovers that Darkseid could have possessed him, because he still contained doubt and that Kara did in fact save the day because she’s more pure at heart.

Lois still believes in the Blur though – and there are some wonderful moments as Lois dances around her knowledge of Clark’s secret life.

“Supergirl” is a wonderfully powerful episode filled with nods to the future Superman world, not to mention some great Kara/Clark moments (the best one involving her trying to teach him how to fly).

The direction by Mairzee Almas is quite good and even more stylish than a normal SMALLVILLE episode. When Lois is put into some weird deadly bondage contraption by Godfrey – it’s quite arty and super cool. Plus it’s Lois and bondage together – what more could you ask for?

SMALLVILLE certainly takes chances, and to create a world where superheroes have to hide their identities and be viewed as “vigilantes” (and hated by the general public) is definitely a clever and original direction. It adds a wealth of subtext and value to Clark’s journey and it also allows characters like Green Arrow and Supergirl to be a nice mirror to Clark’s own ultimate journey to becoming the Super hero we all know he’s going to become.