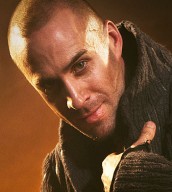 Well, rushing towards the finale of CAMELOT you would hope that more starts happening, and following in the wake of episode seven where Morgan (Eva Green) had assumed the form of Lady Igrain (Claire Forlani), this latest episode “The Battle of Bardon Pass” did not disappoint.

King Arthur (Jamie Campbell Bower) and Lady Guinevere (Tasmin Egerton) have had their extramarital activities exposed to Leontes (Phillip Winchester) who doesn’t take the news well. It’s too bad that the writers of the show decided to label Guinevere a whore so early on before she ever marries Arthur, and well before the appearance of Lancelot. If the series gets to that point; he behavior won’t exactly be unexpected and it’s too bad, it would have been more interesting having her agonize over loving two men if she hadn’t already done it right out of the chute.

Another note on that. How realistic is it that she would chose Arthur over Leontes? Just look at them physically. Leontes is scorching hot and Arthur is kind of offbeat looking. Leontes is more the nice guy next door look, and Arthur looks like the skinny skater kid on the corner that pesters you all the time. Honestly, Guinevere is just a dumb inconstant child if she can’t see what’s right in front of her.

Merlin (Joseph Fiennes) spends most of the episode pissed off, and with good reason since he finally scored with Lady Igraine only to find out that he shagged Morgan instead. The worst part of his scorned lover’s rage is that he and Igraine trot back over to Castle Pendragon to confront Morgan, only to be tied up and bound back to Camelot for trial. Merlin let his rage get the better of not only himself, but the woman he cares for, and now they’ve both fallen into Morgan’s trap.

Arthur and his knights are drawn away to help defend Bardon Pass, which is one of the points of his realm, and of course this whole thing was a trap set by Morgan as well. She’s certainly stepping up her plans to have done with all of her opposition by the end of this season. Arthur decides to stay behind to cover everyone’s escape and we have our official cliffhanger for the end of the episode leading into the finale.

I am at least hoping that Nun Sybil (Sinead Cusack) gets her head handed to her in the finale by Igraine or Merlin. She is a loathsome woman (the character not the actress) and I really feel that Morgan needs a bit of her power destabilized if she is going to suffer at all.

The battle between Morgan and Arthur stretched FOREVER, and it will be interesting to see how a second season of this series will play out. I guess everything depends on the finale and what kind of rating the show has gotten. It’s not a violent bloodbath of fun like the other Starz period show SPARTACUS, but it has been an mostly entertaining ride from start to finish.