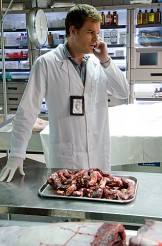 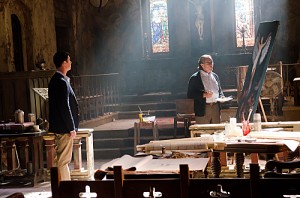 Poor Dexter just can’t keep a friend. Either they turn out to be substantially more messed up than him (the characters played by Christian Camargo, Jaime Murray and Jimmy Smits in, respectively, Seasons 1, 2 & 3) and he has to kill them, they stop being messed up and leave (Julia Stiles’ Lumen in Season 5) or they get murdered (Julie Benz’s lovely wife Rita at the end of Season 4). So the prognosis hasn’t been good for Mos’ Brother Sam since he first extended his hand to our beleaguered hero. At least Dexter can’t really blame himself this time for what happens.

in the latest episode of DEXTER – “The Angel of Death” – the Miami Metro investigation of the Doomsday killings (as they’ve been dubbed) has its focus on the right man, Professor Gellar (Edward James Olmos). However, when this hits the papers, the professor decides to be cautious and sends Travis (Colin Hanks) solo to procure “the Whore of Babylon.” Not surprisingly, Travis blows it. Travis doesn’t know that he’s blown it even bigger in terms of leaving evidence that Dexter uses to track him down. Dexter of course doesn’t share this with his sister Deb (Jennifer Carpenter), who’s heading up the investigation. Instead, Dexter gets Travis in a garrote, but when he learns that Travis hasn’t actually killed any of the victims (that would be the professor), Dexter lets Travis go, warning him to stay away from Gellar. In a subsequent phone conversation with Gellar, Travis says he’s too sick to do the night’s work and Gellar is rightly suspicious.

In other news, Dexter impresses Deb’s new detective Anderson (Billy Brown) with his forensic prowess – it takes Dexter about two seconds to determine that a dead husband and wife are a murder/suicide (the wife discovered via cell phone photos that her spouse was cheating). Deb can’t get used to her new office (it smells too much like its previous occupant, LaGuerta) and feels out of place staying at Dexter’s, so Anderson arranges for her to lease the murder scene unit.

Batista (David Zayas) and Quinn (Desmond Harrington) travel to a university to interview attractive professor Clarissa Morris (Mariana Klaveno, previously Lorena on TRUE BLOOD), who was once a teaching assistant – and lover – of Professor Gellar. Despite Batista’s concerns that Morris may wind up being a material witness, Quinn sleeps with her. Coming to collect his partner, Batista finds a notebook in Morris’ home that has sketches recognizable as Gellar’s work. Morris is taken in for questioning.

Brother Sam comes to the station to report that his auto shop was shot up after hours. Dexter invites him over for supper and Sam says he can see an inner light in Dexter. Dexter is simultaneously skeptical and hopeful. Then Brother Sam is gunned down at his auto shop.

Dexter would have had to study under the Yoda of Guilt to feel responsible for Brother Sam’s death, which isn’t to say he won’t blame himself somehow. It’s a safe bet that the killer will wind up in Dexter’s hands.

As for the overall storyline, it looks like the season is building to some sort of attempted terrorist act by Gellar (and possibly Travis). In theory, pitting Dexter against attempted mass murder as opposed to a serial killer who takes lives in ones and twos has potential, both logistically and philosophically. However, so far this novelty hasn’t played out dramatically. Perhaps this is because the characters are so caught up in their normal day to day crises (our regulars all work in a big-city police homicide division, after all – it tends to hold their attention), but it still seems like things should feel a little more ominous than they do at present.

This said, DEXTER at its most relaxed is still a lot more gripping than many series at their most gripping. The friendly, bemused interplay between Hall and Mos is appealing, and Quinn putting his foot (and other parts of his anatomy) in the middle of a case yet again is always good for upping the ante. “The Angel of Death” is perfectly sound, it just doesn’t reflect DEXTER at its finest.