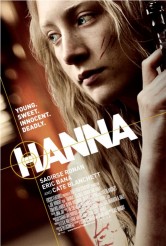 Saoirse Ronan is brilliant as the title character in a film that, as a whole, isn’t quite up to its leading lady

HANNA is one of those movies that poses some intriguing questions, answers them on the fly and then has nowhere to go, leaving the entire enterprise feeling like a prologue to some other unmade film. Saiorse Ronan is an extraordinary young actress who commands attention at all times she’s on screen, which is in nearly every scene here, so HANNA is worth watching. However, the plot doesn’t add up to much and has a few too many “wait a minute” logic glitches for comfort.

Ronan plays the title character, who has grown up in a snowy Finland forest with her father Erik (Eric Bana). Hanna knows how to hunt, shoot, fight, speaks multiple languages and has a fake identity she recites by heart. But by age sixteen, living in an isolated cabin is finally not enough for Hanna, and when Erik tells her she has a choice, she activates a homing beacon that sets American CIA agent Marissa (Cate Blanchett) hell for leather in search of father and daughter. We quickly learn that Marissa is ruthless and Hanna is a combination of extreme innocence in the ways of the world and extreme deadliness when threatened.

There is a certain wonderful spectacle to watching Hanna efficiently, expressionlessly deploy herself as a weapon (think Summer Glau in SERENITY or TERMINATOR: THE SARAH CONNOR CHRONICLES, but even younger and less worldly). Even so, the film is most alive when Hanna is having her first social adventures, bonding with a pop-culture-savvy British teen (an appealing Jessica Barden) and being marvelously misperceived by the teen’s mellow counter-culture parents (Olivia Williams and Jason Flemyng, both very amusing in their naturalistic earnestness).

The screenplay by Seth Lochhead and David Farr, based on Lochhead’s story, fares less well when it gets into the machinations of both Marissa and Erik. It doesn’t make sense for Marissa to risk her current professional standing by calling attention to a past mistake in trying to wipe it out. We’re told in the press notes that this is about Marissa’s guilt and self-loathing, but what comes across on screen is simply a counter-productive plan. (Some members of the audience may also be annoyed that Marissa is lectured on being a Bad Person for choosing not to have children. Does the woman’s evil know no bounds?!)

As for Erik getting the whole ball rolling by having Hanna activate the tracking device, he’s banking on the fact that Marissa has exactly enough power to find Hanna, but that once Hanna and Marissa face off, nobody else is going to care. This doesn’t make a lot of sense, either.

Director Joe Wright shows visual flair throughout. A high point is a trippy, visually evocative sequence set in a decrepit fairytale theme park that is pretty marvelous to watch, even though our sense of narrative cause and effect has pretty completely shut down at this point.

One more complaint: the film opens with a hunting sequence where Hanna appears to graphically kill a reindeer with a bow and arrow. For all those who feel concerns about this sort of thing are silly in the face of all the human deaths the film contains – we can be sure that no actors were killed in the making of the film. There is no such guarantee about the reindeer, especially since the film was shot in a country that does not have the equivalent of US/UK SPCA oversight and there is no “no animals were harmed” disclaimer in the closing credits. Some audiences don’t want to see actual animal death in an otherwise fictional film – if that’s not what we’re really witnessing, an end credit noting the fact would be welcome.

Overall, Saoirse Ronan is a marvelous, powerful actress and Hanna is a great character. Perhaps a sequel to the film HANNA will have a script worthier of both.

CLICK HERE for HANNA director Joe Wright on the film