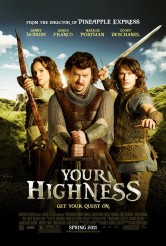 A parody of medieval fantasy quests that has more F-bombs than hit jokes, but still boasts the occasional real laugh

YOUR HIGHNESS tries to straddle the treacherous territory between MONTY PYTHON AND THE HOLY GRAIL and the original CLASH OF THE TITANS. As might be imagined, that’s an easier feat to describe than to accomplish. The ambitious task is hindered by the fact that the screenplay by star Danny McBride & Ben Best relies more on genital humor, homosexual panic and use of the type of strong slang audiences aren’t used to hearing in this type of setting than on wit and invention.

On the other hand, Natalie Portman(!) finds her inner Graham Chapman, playing her female warrior with the kind of absolutely straight face necessary to pull off this sort of material. If you grin at the idea of the recent Oscar winner declaring that she feels something in a most feminine part of her anatomy the way someone else might assert they feel something “in their bones,” then all hope for YOUR HIGHNESS is not lost.

The title of YOUR HIGHNESS refers to McBride’s character Prince Thadeous, who lives, perpetually resentful, in the shadow of his fabulous older brother, Crown Prince Fabious (James Franco). Fabious seems truly oblivious to Thadeous’ desperate jealousy. However, when Fabious’ virgin bride-to-be Belladonna (Zooey Deschanel) is kidnapped by the evil sorcerer Leezar (Justin Theroux), the King (Charles Dance) decrees that Thadeous will accompany Fabious on the quest to rescue Belladonna … or else.

The idea of a grown man in live action with the sulking attitude of either a teenager or a Disney cartoon villain has potential, and while Thadeous is at times a bit tedious, McBride does have some fun with him, putting some in the win column of the hit/miss joke chart. Franco’s performance is pitched right down the middle, so that it can be viewed as either parody or a straight take on a princely champion.

It seems more a fault of the script and David Gordon Green’s direction than of Franco’s performance that Fabious is given almost nothing really funny to do. When he’s swooning over Belladonna, it’s excessive, but not nearly on the scale called for to be farcical, and when he’s being heroic, it’s too much like the real thing to generate mirth.

Portman’s fierce, lethal Isabel shows up at least a third of the way through the film, and the movie brightens a bit with her arrival. The actress seems to have a strong grasp of the tone that ought to be set here and manages to make her Xena-esque character simultaneously earnest, sincerely capable and fairly nutty.

It should be noted that a whole bunch of the humor here is based on various versions of fear of male homosexuality, which lands with an utter thud. There is also a really unpleasant riff on past child sexual molestation, which is the opposite of funny.

In the end, YOUR HIGHNESS resembles a quest where the viewer must weigh the value of the prizes picked up randomly along the way against the muck that spatters one’s armor during the journey.