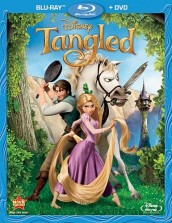 Disney has had a rough patch when it comes to their own homegrown animated films especially when they’re competing in-house with the magicians at Pixar (who, up until this point, can do no wrong).

It’s been frustrating to watch Disney fumble the ball time and again, but thankfully with their 50th animated feature film TANGLED, they got it all right.

Originally called RAPUNZEL, the film had the potential stigma of being just another Disney Princess movie (which clearly fell out of favor with the failure of THE PRINCESS AND THE FROG).

So with a name change to TANGLED and a co-lead in the dashing Flynn Rider (voiced by CHUCK star Zachary Levi), the whole fairy tale Disney world was turned on his head and became a boxoffice success. It’s now arriving on Blu-ray and DVD.

Chalk one up to Rapunzel herself, as voiced by the spunky Mandy Moore. She brings so much life and vibrancy to the role, it’s a marvel just listening to her (and also wondering just exactly why Moore hasn’t been able to bottle this kind of charm up in her feature film roles).

The story adheres somewhat closely to the Rapunzel tale. As a child, princess Rapunzel was stolen by an evil woman and forced to live in a tower where her hair grows super long.

Mother Gothel (voiced by Donna Murphy) is her captor, but she views her as her actual Mother. Yet Rapunzel longs for the flying lanterns that are released into the sky on the night of her birthday. She doesn’t realize this is designed to help her find her way courtesy of the King and Queen.

Rapunzel wants to check it out, and when thief Rider shows up uninvited, the two of them set out on a journey to find themselves … and ultimately each other.

The songs are non-intrusive and are actually much more bouncy and current that traditional Disney fare. The humor is hip and the action is quite entertaining. Rapunzel is just as resourceful and able as Flynn, which gives the film a nice counter-balance.

The Blu-ray comes with a DVD copy of the film, but the special features prove to be a bit skimpy.

There’s the making of the film and a small featurette on the 50 Disney animated films (they show clips, but not the actual names of the films – huh?)

There are three variations on the “Storybook Opening” that was intended to kick-start the film. Most of it is slightly advanced storyboards and not fully rendered CGI. The same goes for three deleted scenes. These scenes seem to have existed in a slightly alternate version of the story where they go to the bar and it’s not singing, but poetry reading (the new version is much better). Rapunzel also uses her hair as a weapon in this incarnation – which is fun, but again, it’s storyboards, not actual animation.

Considering Disney’s past animated films are given the royal Blu-ray treatment, you’d think they would have put a little more energy into the special features with TANGLED. It’s a great movie and deserves more, but maybe that’s the point. In five years time, we’ll have the DIAMOND EDITION with all the stuff that should have been on this current installment. Thankfully, the movie is worth owning the Blu-ray even without the deluxe treatment.

CLICK HERE for AX’s interviews with DONNA MURPHY, MANDY MOORE and ZACHARY LEVI, plus photos from the PREMIERE of TANGLED and more!