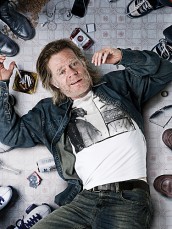 Arguably one of the best character actors of his time, William H. Macy still isn’t the name you would think of when casting a drunk and disorderly father in the new Showtime drama SHAMELESS (airing Sunday nights). 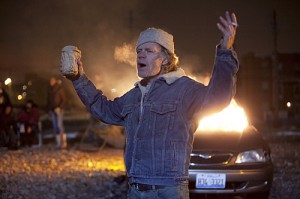 On whether playing the relentless Frank Gallagher is exhausting…
“No, it’s a relief,” he says. “He’s one of the greatest characters I’ve ever gotten to play. He is absolutely a narcissist, unapologetic. He’s shameless.”

On whether or not he enjoys the casualness of his character…
“Well, I am the moral center of this show,” he adds. “I’ve got the role of the century here. I am having so much fun. I love every part of it. I look really cool on a motorcycle with my hair like this. I’ve got the most outrageous things to do, great writing, outrageous stories. They’re true. You know what I mean? They’re all true stories to the human condition. There’s love at the bottom of every single episode, but they’re outrageous. Wait ‘til you see some of the stuff we do. It’s amazing. I mean, it stops us on the set every once in a while. We just think, ‘That is shameless.’”

On stretching his acting abilities with a role that doesn’t exactly scream ‘Bill Macy is perfect for this’…
“I’m too old for that,” says Macy. “No. It was just a great job with great writing with [producer] John Wells. Stretching? Did I want to stretch? The money. It would be the money.” 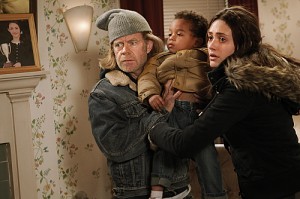 On his favorite pot heads and drunks on screen…
“I grew up watching Red Skeleton do his drunk Clyde Kadiddlehopper? Was that his name? Clem Kadiddlehopper. I’m going brain dead,” Macy notes. “Yeah, I’ve got some favorites, but I’m having a senior moment here, and I can’t come up with a single name, but it sure is fun to play someone who is toasted all the time. My whole career, I feel like I’ve spent a lot of time speaking for the little guy, the disenfranchised. And whether you like it or not at this moment, perhaps in this room, but certainly all across the country, a lot of people are really toasted right now, drunk as skunks, and I speak for them. I am the spokesperson for people who like to start the day with a couple of brewskies. So there. “

On getting away with some inappropriate comments because his character is inebriated…
“There’s all of the in vino verities,” he concludes. “I mean, Frank can say outrageous things that are true, but you are really not supposed to say them anyway.”

CLICK HERE for interviews and reviews from Showtime’s DEXTER