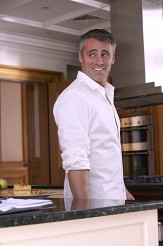 The former FRIENDS star talks about his edgy new series where he plays ... himself

With his new Showtime series EPISODES set to premiere January 9, former FRIENDS and JOEY star Matt LeBlanc explains why it took so long for him to return to series television and he admits it wasn’t because the offers weren’t coming in.

EPISODES follows LeBlanc playing a semi-fictional version of himself when he’s asked to take the lead role in an American adaptation of a hit BBC sitcom – and all the troubles that come with “Americanizing” it.

“When you have writing you believe in, you can blindly commit,” says LeBlanc.

The only difference with EPISODES, is it’s single camera vs. multi-camera which came with its own adjustment period when a joke comes up during shooting.

“When no crowd is laughing, it’s a little unnerving when a punchline comes up,” he says with a smile.

The X List: WHICH VILLAINS/HEROES WILL OR WON'T APPEAR IN THE NEW ‘BAT...
Interview: SUPERNATURAL star Misha Collins elevates his character to a...
Exclusive Interview: HEMLOCK GROVE stars Landon Liboiron and Bill Skar...
THE MUPPETS: Co-Creator Bill Prady gives the scoop on Kermit and frien...