In Hallmark Channel’s telefilm GOODNIGHT FOR JUSTICE, airing tonight, Luke Perry plays John Goodnight, a circuit judge in the Old West who rides from town to town, administering the law as he sees fit. Although Perry is still pretty well-known for playing Dylan McKay on BEVERLY HILLS 90210 – spending ten seasons (1990-2000) on a television series will do that – he has lots of other projects to his credit, including the title role in Showtime’s futuristic Western series JEREMIAH, which he also produced, the romantic lead in the original BUFFY THE VAMPIRE SLAYER feature film and Linc Stark in HBO’s surreal JOHN FROM CINCINATTI.

Perry is wearing two hats (three, if you count the one belonging to his character) as producer and star of GOODNIGHT FOR JUSTICE, which is directed by his friend and 90210 costar Jason Priestley. Talking about the project at a party thrown by Hallmark at the Television Critics Association press tour, it turns out that Perry is a great fan of both the Western genre and of Priestley’s directing abilities.

ASSIGNMENT X: Did you commission the script for GOODNIGHT FOR JUSTICE?

LUKE PERRY: I came up with this idea, but I can’t write it all out. I told it to these writers, Tippi and Neal [Dobrofsky], they’re really nice people, and they turned it into a script, and I doodled on the script and I wrote some dialogue and we all wrote it together.

AX: Did you come up with the idea because John Goodnight was a character that you wanted to play?

PERRY: Yeah. I had been reading a lot – I’ve been developing another movie about Andrew Jackson. For me, one of the most fascinating times in Andrew Jackson’s life was before he was the President, when he was a circuit judge. The idea of being judge, jury and executioner and traveling, that’s pretty cool.

AX: Are you a fan of Westerns overall?

PERRY: I love Westerns. I think if there’s any story that you want to tell, from LAWRENCE OF ARABIA to THE BOURNE IDENTITY on down, it can be told as a Western. You can’t say the same of other genres. The Western is the absolute catch-all. You can tell everything. 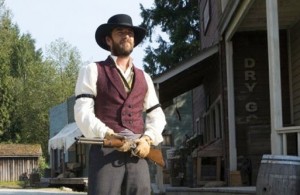 AX: Is one of the appeals of the Western for you that there are still places to be discovered and explored, that people didn’t feel like they already knew everything?

PERRY: I think it’s a combination of those two things and that everyone was always trying to do their best. You had to, or you’d die.

AX: Now, had you and Jason Priestley kept in touch between working on 90210 and the present?

PERRY: Now, here’s the deal, me and JP, we’re friends. We always will be, we always have been and we’ve always stayed in touch. People have brought us really cheesy stuff and wanted us to do it together. We never wanted to do it. We both liked this one, so we jumped on it.

AX: Does he have a cameo in it?

PERRY: No. I tried to get him to be one of the guys that I hung, but logistically, it didn’t work out that day, but I’d put a rope around his neck in a second [laughs]. 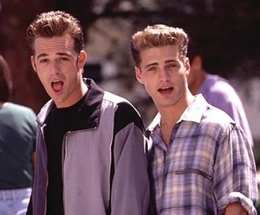 AX: How is it being directed by somebody you know that well? Do you tend to trust him, or do you tend to think, “I know you well enough to say you’re full of it sometimes”?

PERRY: Both. He tells me when I’m full of sh*t and I tell him when he’s full of sh*t. I trust him a lot. I’ve been directed by him many times before. He directed like eighteen episodes of 90210. So I’m used to having JP in the director’s chair.

AX: You also directed some episodes on 90210. Do you still direct?

PERRY: Sometimes. When I feel compelled to. Jason’s got a great attitude about it – he’ll just direct anything that comes his way because he can, he’s that talented. I need to really be compelled by the story.

AX: Why did you decide not to direct GOODNIGHT FOR JUSTICE?

PERRY: It was just political. It was all Canadian unions. I had to have a Canadian director and Jason is a Canadian, and so I said, “All right, if it has to be Canadian, it’s Jason, because that’s the closest I can come to directing the movie myself.” And whether it’s this movie or any other movie or an episode of something, that’s just the way he and I work. It’s very close. It’s hard to tell who’s the director or the actor at any given moment. I love the Canadians – I’ve shot so much film in Canada. Some of the greatest stuntmen in the world are in Canada, the greatest horses in the world, some of them are in Canada. Danny Virtue was our wrangler/stunt coordinator on this show. He’s amazing, he’s a legend. He’s the guy they made the movie HOOPER about. He’s the real live deal. Him, Clay Virtue, Cody Virtue. They’re a great family, I love them, I love working with them. That’s the great thing about making a movie like this. You can get together with somebody’s family, a dynasty of filmmakers, stunt people who do it.

AX: Anything else you’ve got coming up we should know about?

PERRY: I’m going to make some more of these [Westerns].