Home » Comic-Con 2011: DOCTOR WHO stars Matt Smith and Karen Gillan give the scoop on the rest of Series 6

Comic-Con 2011: DOCTOR WHO stars Matt Smith and Karen Gillan give the scoop on the rest of Series 6

We get details on the upcoming fall DOCTOR WHO episodes

During the press event for DOCTOR WHO at the San Diego Comic Con 2011, stars of the show Matt Smith and Karen Gillan were surprisingly open about some of the plot lines in store for the fans in the second half of the sixth series.

Here’s what the dynamic duo had to say about it (warning! spoilers ahead):

Both stars are very excited about the first episode of the second half of Series 6,“Let’s Kill Hitler.”

“I think it’s my favorite title of the season so far,” Smith says. “Alex Kingston is on fine fiddle through the episode. She is just brilliant in it. There are some great science fiction moments where you are going ‘no way!’”

Gillan agrees with Kingston’s performance, calling it her best to date. “And we have this really cool robot/villain that goes back and fixes history,” she says. “So it goes back in time and fixes people that have done [something] wrong in history.”

The second half of the series will also explore the relationship between Amy (Gillan) and River Song (Kingston), Gillan says.

“That’s going to be really fun considering their relationship now and the big revelation,” she says. “We’ll see parental instincts coming into play. It is really weird.”

But it won’t all be fun and weirdness; something terrible happens to Amy in episode 10. Both Smith and Gillan wouldn’t talk about it, but it is “really, really bad,” Smith says. “And the Doctor is a part of it.”

Smith also says that Gillan “gives a wonderful performance, the best I think she has given in two seasons.”

Some of the other things to look forward to: crazy dolls, Cybermen, James Corden reprising his role as Craig Owens from last year’s episode “The Lodger” (which Smith says will be “really, really fun”), and a massive twist in the finale.

Stay tuned for more on the second half of DOCTOR WHO Series 6 right here at Assignment X! 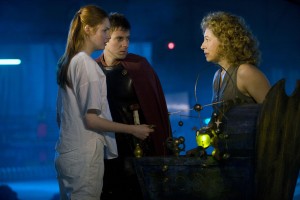