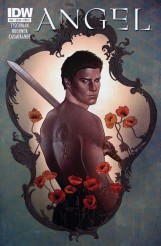 A "MEH" ending to a too-often mediocre series

Well Angel and most of his crew survived AFTER THE FALL, and starting with issue #18 the series was simply re-named ANGEL. That was pretty much the point I lost interest in this series. Once Joss Whedon was no longer directly involved this series because the typical bad-genre spin-off comic book that has happened a hundred times over. The stories were weak and spread out, new useless characters were brought in, then killed off, or worse off they stuck around – and then the whole series attempted to tie itself up in a neat little bow in issue #44.
The world of ANGEL at IDW ended with a big whimper instead of a bang like the alley fight in the final season of the series. The final issue is the culmination of the six part story of “The Wolf, The Ram, and The Hart”, which found Angel still trapped in the future with Illyria as his only real way home. Meanwhile back in current time Anne is giving birth to a demon baby that is killing her, and Connor, Gunn and company are locked in a life and death battle with James.

Angel is sent back to the past by Illyria and saves the day again, also in the process saving Anne and allowing her to have a normal childbirth that doesn’t kill her. Angel visits with good old Wolfram and Hart and informs them that no matter what they plan he will be there to stop them, and if he isn’t Connor will be. Then he goes wandering down an infamous alleyway and contemplates all of the people he’s lost over the years.

So the story was “Meh” as far as dynamic Angel sagas go. The most entertaining thing was Illyria and her pet critter Pancakes, and they crossed over from an Illyria mini-series. I knew from previous news items, that IDW was going to leave it Joss and Dark Horse to tell the tale bridging ANGEL and whatever the series is going to be called once it starts back up at Dark Horse Comics, but a little bit of a tie-in would have been helpful. As it stands now, ANGEL just ends and then the next time we see the character he’s involved with Twilight and is once again possessed and off his rocker.
The art was solid as always with the series, and that has been a nice constant, and the cover art is beautiful, so at least the issue is pretty to look at.

ANGEL AFTER THE FALL was such an awesome series, I honestly have no idea how they could’ve followed it up with anything that would be as good. It seemed like a peaceful transition for ANGEL and SPIKE to move back under the Dark Horse banner, so perhaps IDW just ran out of things to do with the characters. It certainly will be interesting to see what happens in between this ending and BUFFY SEASON EIGHT, and to see where Angel’s new adventures with Faith will take him.