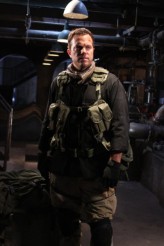 Someone behind-the-scenes at CHUCK must have been paying attention to how much the quality control had been suffering the last couple of weeks and made some drastic changes that got the show back on track.

With “Vs. The Couch” we get a Casey-centric episode which finally gives the under-utilized Adam Baldwin some cool stuff to do after being sidelined the last couple of weeks as his character had an “injury.”

We get to see Casey’s former “A*Team” in Iran in 1999 after they discover a bunch of gold. It’s not the mission, and the three other members of his team (spearheaded by Eric Roberts) want to take the gold on top of their mission. Casey likes to stick to the plan, so he ambushes them and court martials them.

Cut to present day, and his three buddies have escaped a high security prison, and have been waiting for a moment to get Casey’s hand (they need it to access the gold in Iran), so Chuck (Zachary Levi) and the team stage his death, hoping to bring them out of hiding.

Another plus, if they capture them, Chuck may get even closer to his mom (Linda Hamilton). Things don’t go as planned, and soon Chuck learns his mom may be one of the bad guys.

Meanwhile, Casey discovers Morgan (Joshua Gomez) is dating his daughter and he doesn’t approve at all. This all culminates in a rescue mission back in Iran, with some unexpected results.

One of the reasons why Chuck works so well, is the dysfunctional family aspect of everyone involved. That’s why Casey needs to be integral to the team – he makes things so much more interesting especially with the gravitas Baldwin brings to the role.

That said, when comedy happens around Casey, it’s even funnier because Baldwin gets to play the straight man with such intensity and seriousness. At some point during the episode, Casey is paralyzed (due to faking his own death), and it’s actually Jeff and Lester (Scott Krinsky and Vik Sahay) who come to the rescue – oblivious to the fact that Casey is a spy (they just think he overdosed from some heavy recreational drug use).

That’s the kind of insane lunacy that’s been missing the last couple of weeks. Plus, all the poorly written Sarah/Chuck relationship angst is gone this episode. Instead, it’s replaced with a much more satisfying budding romance between Morgan and Casey’s daughter.

Great stuff overall, and a definite improvement over the last three weeks where I actually thought CHUCK was done for good. Thankfully, it was a rough patch and with Chuck’s mom reuniting with her son next week, Season Four is just revving up.