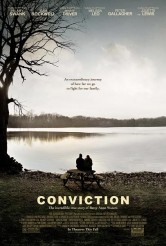 Although parts of CONVICTION have no doubt been fictionalized to make a better story, the heart of the film is what in fact happened. When Kenneth (Sam Rockwell) was convicted of a vicious murder and lost his first appeal, his sister, small-town barmaid Betty Anne Waters (Hilary Swank) put herself through law school for the purpose of becoming a lawyer so she could re-open her brother’s case and exonerate him. The entire process took eighteen years.

Even if one isn’t familiar with the case, one can guess the conclusion on the basis of the fact that a feature film has been made about it. Given this knowledge going in, it’s impressive how much actual suspense and curiosity is generated. Written by Pamela Gray and directed by Tony Goldwyn, CONVICTION is about equal parts character study, mystery and legal drama.

Betty Anne and Kenny bonded in childhood, two of seven children of a neglectful, alcoholic mother whose offspring were all eventually put into foster care. As the film has it, Kenny was forever pulling Betty Anne into various scrapes (housebreaking, stealing candy, etc.) and Betty Anne was forever sticking up for her beloved big brother. As an adult, though, Betty Anne has settled down with her husband, their two young sons and a steady job, while Kenny is still known throughout town as a wild fellow.

Given his public displays of temper, it’s not surprising the cops want to talk with him when a local woman is found dead and her home burglarized. When some damning evidence against Kenny is presented at trial, he is sentenced to life in prison. However, Betty Anne is absolutely convinced of his innocence. After Kenny’s first appeal fails, she also becomes convinced (probably rightly) that even if she could afford another lawyer, there’s no one who would believe in Kenny the way she does, so she begins her quest, first to pass the bar, then to figure out how to exonerate Kenny – who doesn’t make things easy.

CONVICTION has at least two scenes that qualify as great: one where Betty Anne’s certainty in the rightness of her cause is tested in a shocking way, and another where she discovers from a surprising source that perhaps not everyone would drop everything for family the way she has done for Kenny. The audience knows this, of course, but it’s a telling moment for Betty Anne, who simply is like a guided missile when it comes to her brother. She may doubt her own abilities, she may doubt her options, but it doesn’t occur to her to wonder whether she should be spending this chunk of her life in this way, for this reason.

No doubt the script has tweaked various elements for added voltage, but most of CONVICTION plays with great plausibility. Swank, who has earned a couple of Oscars for her portrayals of extraordinarily determined working-class women, shows her expertise in getting into the mindset of another woman totally focused on an unorthodox goal. Rockwell is superb as Kenny, hostile, self-pitying, even frightening, yet with flashes of charm and an open, wounded nature that allow us to see some of the humanity Betty Anne is sure he possesses.

Melissa Leo stands out in a supporting role as a very hostile cop, and Juliette Lewis and Clea DuVall are both impressive as damaged women in Kenny’s life.

The closing postscript omits the fact that, in real life, Kenny died in an accident within a year of his release. The film could probably have afforded to include this information. Through the depiction of both Betty Anne’s and Kenny’s separate struggles, we get enough sense of what freedom and exoneration mean here to not take either for granted. CONVICTION does have its big, predictable emotional moments, but it’s steady and thoughtful enough to do more than hit the expected notes – by the end, we feel like we’ve lived through something ourselves, and that’s just as the filmmakers intend.