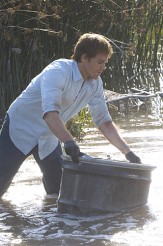 Dexter tries to figure out what to do with Lumen in this good, but comparatively measured episode

After the “!!!!” moments of last week’s episode “Practically Perfect,” it makes sense that it feels like both DEXTER the series and Dexter the character (Michael C. Hall) are taking a little time to recover from various shocks and plan ahead. A good portion of “Beauty and the Beast” is concerned with Dexter’s dilemma over Lumen (Julia Stiles), the young woman who was captured and tortured by Dexter’s latest target. Problematically for Dexter, Lumen witnessed him killing Lumen’s captor.

Dexter tries to nurse Lumen back to health – she’s got criss-crossing cuts all over her back – while trying to figure out what he can do that won’t cause either of them to die. Harry’s shade (James Remar) urges Dexter to kill Lumen, as the number one rule remains “Don’t get caught,” but Harry instead tries to get the wary woman to trust him. When she does, it turns out that Dexter’s victim wasn’t her only tormentor, and now that Lumen knows she’s not going to be killed, she wants payback.

Deb (Jennifer Carpenter) begins making some headway in the Santa Muerte case, though she blames herself when one of the suspects seriously injured a bystander. Dexter has to coax Harrison’s nanny Sonya (Maria Doyle Kennedy) back to work after Dexter is out all night dealing with Lumen (which he finds a way to spin for her without being entirely untruthful), Quinn continues his quest to prove that Dexter and Kyle Butler are the same person and Internal Affairs seems intent on prosecuting Batista for hitting another officer.

The main suspense here revolves around plotting rather than emotion. We follow Dexter around as he does the sort of detective work on Lumen that he does on his prospective targets, albeit this time he means to help instead of harm. It’s interesting, but not visceral.

Unlike Dexter, most viewers won’t worry that Harry’s words will sway him to do something he’ll regret, so we simply wonder what he’ll do. Hall makes Dexter’s thought processes intriguing to watch (a commendable acting feat), but the episode still feels like it’s moving at a relatively leisurely pace.

The storyline with Lumen seems to be heading toward a variation of the Season Three overall arc, though Lumen at present appears not so much evil as tragically damaged. Stiles conveys powerful pain and works well opposite Hall’s sympathetic restraint. The Santa Muerte plotline provides the episode’s action, as well as an emotional crisis for Deb (did her actions make things better or worse for the hostage?). It’s not clear where the whole Internal Affairs business is going, but there’s just enough of it to keep us curious without cutting into the primary narrative.

And of course, there’s Sonya – is she going to be as good as she seems or will she have a dark side? Kennedy is certainly appealing and stands her ground effectively.

“Beauty and the Beast” is good, but it’s an episode that feels more like a bridge than a destination in itself.