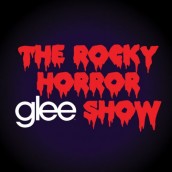 As GLEE hits Season Two, the balance between karaoke and reinventing classic songs has lately fallen into the bland karaoke treatment.

And with the latest CD (and digital release) THE ROCKY HORROR GLEE SHOW, we get predominantly karaoke. Good karaoke, mind you, but karaoke nonetheless.

That said, the reason why 1975’s ROCKY HORROR PICTURE SHOW has endured for 35 years (and continues to play sold-out Midnight shows) is that the songs are so iconic and indelible that you don’t want to mess with them too much.

Thankfully, most of the redux’s work here.

“There’s A Light (Over At The Frankenstein Place)” is enhanced by the arrangement and inclusion of the various Glee voices throughout.

Surprisingly, “Time Warp” (the song everyone is going to download) is super faithful and even includes Chris Colfer doing a pretty amazing imitation of Richard O’Brien’s lead vocals.

“Damn It, Janet” features Finn (Cory Monteith) and Rachel (Lea Michele) as the film’s iconic couple Brad and Janet who are duped into spending a night at “Frankenstein’s place” and end up getting sucked into a night of sexual depravity and gender identity. Michele’s vocals capture the icky sweet smoothness of Susan Sarandon in the original film, while Monteith has the aw-shucks attitude Barry Bostwick brought to Brad.

The film’s opening song “Science Fiction Double Feature” is featured in its entirety (and pretty faithfully).  The same for “Touch A Touch A Touch A Touch Me.” It’s a good song, but I think “Rose Tint My World” would have been a far better ROCKY tune to include.

Perhaps the most successful reinvention of any of the songs is Mercedes (Amber Riley) tackling “Sweet Transvestite” (performed by Tim Curry in the original). She takes the song and puts an Aretha Franklin spin on the tune that makes it soar to previous unheard of heights.

On the negative side, the songs lyrics have been tweaked. The major question is were they tweaked to make them more kid-friendly? It is a song about being a transvestite from “Transsexual, Transylvania.” In the new version, Frank-N-Furter is from “Sinsational, Transylvania.” Why the lyric change? It’s a bit annoying, since if you’re going to do ROCKY HORROR PICTURE SHOW, especially on a show like GLEE dealing with teenagers, you either give in to the misogyny and button-pushing completely or don’t do it all. The slight lyric tweaks are actually a bit irritating.

The disc concludes with John Stamos rocking out on “Whatever Happened To Saturday Night?” It’s hard to supplant anything that Meat Loaf has done, but damn, does Stamos really deliver the goods here. While I like the song (and Meat Loaf’s original performance), I always felt the arrangement in the film was a bit tepid for Meat Loaf’s grand personality. Somehow the GLEE producers felt the same way, and really super-charge this song with extra production value and deliver the version the movie should have back in 1975.

Overall THE ROCKY HORROR GLEE SHOW is a fun novelty record that will introduce a whole new generation to the “absolute pleasures” of one of the weirdest and kinkiest cult films ever made. The fact that it’s somehow wormed its way into the mainstream, while still retaining its edge is amazing. The songs here are good and do the music justice – but for purists, nothing will ever compare to the original.