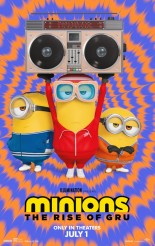 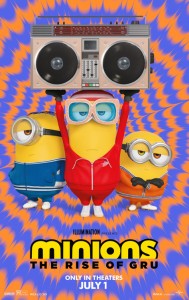 With their origin story taken care of in 2015’s MINIONS, the little yellow hench-beings (all voiced by Pierre Coffin) first seen in 2010’s DESPICABLE ME and its sequels now get another flashback feature.

MINIONS: THE RISE OF GRU shows (very briefly) how the Minions came to work for Gru and, at greater length, their early adventures with him.

We first met Gru, as voiced by Steve Carell, as the title supervillain in DESPICABLE ME. MINIONS: THE RISE OF GRU is his back story, too. Since this is animation, it’s no problem for Carell to voice eleven-year-old Gru, who lives with his disdainful mom in conventional American suburbia.

Nevertheless, Gru has an Eastern European accent and an unquenchable ambition to become a supervillain. When he hears that the infamous Vicious Six squad has an opening, he applies. Since he’s a kid, they reject him out of hand. Gru decides to impress them, which winds up with them hot on his tail.

The Minions – especially Kevin, Stu, and Bob, plus new major Minion Otto – try to help Gru in his quest, when not creating problems.

There are several mentor/surrogate parent stories woven in here, which is in keeping with the overall genre and the DESPICABLE ME franchise in general. After all, the adult Gru winds up as the adoptive father of three orphaned little girls, not to mention his paternal role with the childlike Minions.

MINIONS: THE RISE OF GRU is pleasant enough, but it’s a bit hamstrung by the conflicting goals it sets for itself. The movie, as advertised, is about Minions. Minions, as we have come to know them, are unintelligible, anarchistic creatures. They love Gru, but otherwise behave in completely spontaneous ways that often have nothing to do with whatever is happening around them, much less long-term goals.

When Minions were in supporting players, as in the DESPICABLE ME films, or even inadvertently hindering their evil bosses, as in the first MINIONS, they were free to do whatever was funniest at the moment. This has made for a lot of hilarity, but its at odds with the conventions of major studio narrative family filmmaking. Since MINIONS: THE RISE OF GRU is determined to adhere to these conventions, some changes have been made.

While still speaking their own language, we can now make out the general meaning and even some specific words when the Minions talk. They are also now able to organize, plan and follow through on missions. This helps the plot, of course, but takes down the anarchy by quite a few notches. Consequently, the Minions still look and sound like Minions, but they don’t fully feel like Minions here.

Director Kyle Balda, who also co-helmed MINIONS and DESPICABLE ME 3, has a nice sense of color and scale, and screenwriter Matthew Fogel, working from a story he and Brian Lynch created, keeps our antiheroes mischievous without having them do anything, er, despicable.

The voice cast is excellent, with Carell doing a higher-pitched turn as young Gru, and Coffin finally getting second billing for his iconic Minions voices (Coffin also co-directed the three DESPICABLE ME films and the earlier MINIONS, though he seems to be involved solely as a performer this time around). Alan Arkin is invaluable as a cranky old thief, Michelle Yeoh is likewise great casting in her role, and Taraji P. Henson sounds like she’s having a blast as ‘70s baddie Belle Bottoms.

There’s nothing wrong with MINIONS: THE RISE OF GRU, per se. It’s agreeable, and parents accompanying children will be mildly diverted. Then again, the film hesitates to engage with the bananas sensibility that inspired it in the first place.