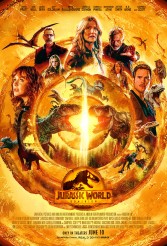 Entertaining although more intriguing in its construction than its narrative 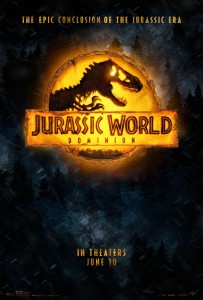 JURASSIC WORLD: DOMINION claims to round out the JURASSIC WORLD trilogy, which is a sequel to the JURASSIC PARK trilogy. All of these are based on Michael Crichton’s novel about the attempt to make a drive-through zoo filled with living dinosaurs, cloned from prehistoric DNA. Not surprisingly, things go catastrophically wrong in the first JURASSIC PARK, and find ways of doing so in each feature thereafter.

It’s not strictly necessary to have seen all or even any of the previous films, as the screenplay by Emily Carmichael & director Colin Trevorrow, from a story by Derek Connolly & Trevorrow, brings us up to date on the basics. However, familiarity definitely helps when it comes to appreciating what original JURASSIC PARK stars Laura Dern, Sam Neill, and Jeff Goldblum bring in returning to the party. It also will fill in a few blanks as to why Owen Grady (Chris Pratt) and Claire Dearing (Bryce Dallas Howard) are so overprotective of their informally adopted daughter Maisie (Isabella Sermon). It will also bring a better understanding of why Owen and Maisie are on such good terms with Blue, the velociraptor living in the nearby woods.

At the end of 2018’s JURASSIC WORLD: FALLEN KINGDOM, an enormous amount and variety of dinosaurs got loose in the larger world. JURASSIC WORLD: DOMINION is set four years later. Former theme park dinosaur wrangler Owen is putting his skills to use, helping round up stray dinosaurs so they can be safely relocated to a sanctuary in Italy’s Dolomite Mountains.

Claire (Bryce Dallas Howard) is now a dinosaur rescuer, willing to risk her life and break the law to expose and stop illegal cruelty to dinosaurs. She and Owen, once on-again/off-again, now live in a woodland cabin, where they are secretly raising Maisie. Maisie, now age fourteen, is a clone of her mother, though she is not exactly a product of the same technique that brought back the dinosaurs.

In a fairly short amount of screen time, most of the dinosaurs get moved to their new home. Removing the creatures from populated areas and transporting them is not what JURASSIC WORLD: DOMINION is about.

Instead, nefarious forces are trying to get hold of both Maisie and a baby dinosaur, as both have unique DNA. Maisie is going through both an existential crisis and teen rebellion at the same time. She’s sick of being stuck in the cabin, even though Owen and Claire rightly warn her that she mustn’t risk being seen.

Sure enough, Maisie defies her adoptive parents and gets kidnapped, along with the baby dinosaur. Claire and Owen set off in hot pursuit.

What does any of this have to do with our trio of scientists from the original 1993 JURASSIC PARK? For a while, not much. Suffice to say that Goldblum’s Ian Malcolm and Dern’s Ellie Sattler are suspicious of something that, on the surface, isn’t wholly dinosaur-related. Sattler brings in Neill’s Grant to help investigate. It’s worth noting that each of the actors has appeared in at least one JURASSIC sequel before now, but this is the first time they’ve fully reunited, and they bounce off one another with evident joy.

Apart from some early CGI/live-action combination shots that don’t fully look like the people and dinosaurs are in the same place, the special effects are great. The dinosaurs, a mixture of practical creations and VFX, are impressively realistic and impactful.

There are also plenty of good act set pieces, some with dinosaurs, some without, and there’s plenty of energy. Trevorrow, who also directed 2015’s JURASSIC WORLD, has a better handle on the balance of action, humor, and sentiment here, creating a flow that is smooth and enjoyable.

People coming into JURASSIC WORLD: DOMINION without having seen any of the build-up (if that’s possible) may just feel gratified that the movie makes good use of previously established people and elements. Yes, the connections between plot threads is a little strained in places, but it mostly hangs together, and the components are fun.

For anybody who’s seen the trailers and/or read the taglines, though, there are some intriguing meta questions. For starters, whatever happened to the notion that the dinosaurs were a threat to human civilization?

This reviewer certainly doesn’t object to the absence of a plotline that villainizes endangered animals. Still, we don’t even get the scene from the extended coming attractions featuring the T-Rex stomping through a drive-in theatre. There are a few sequences at the top of the film showing dinosaur/human conflict in our world. After that the storyline moves into more confined territory.

There is still a menace to the outer world, it’s just not coming from where we might expect in a JURASSIC movie. In fact, minus a few JURASSIC factors, it’s a real-world issue. This is also fine, and it’s to the writers’ credit that the subplot is woven in as well as it is.

Most films, especially those coming from major studios, undergo a complicated script development stage. It’s just that, in JURASSIC WORLD: DOMINION, we get more than the usual sense of ideas that were examined and then discarded within the final cut. By the end, viewers curious about how films evolve will want paleontologist Grant to dig through the layers of JURASSIC WORLD: DOMINION’s evolution, explaining to us which species of subplots survived, which went extinct, and why. In this meta aspect, the movie is entirely on brand.