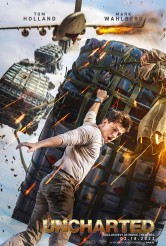 Ambitious and action-filled, but emotionally uninvolving 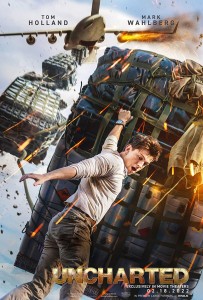 UNCHARTED is based on a phenomenally successful series of PlayStation videogames about treasure hunter Nathan Drake. It’s a rather strange name, at least for this movie, given that so much of it is involved with following maps that lead to other maps, although the title HIGHLY CHARTED wouldn’t have quite the same snap.

UNCHARTED starts at the top of its third act with a wild action sequence, that has Nathan (Tom Holland) trying to avoid plunging to his death by clinging to cargo boxes that are falling out of an airplane.

We flash back to Nathan’s childhood. He and beloved older brother Sam are living at a Catholic orphanage. Both boys are already fascinated by antiquities. When Sam tries to steal a map from a museum, he must flee to avoid arrest, promising Nathan they’ll be reunited someday.

In the present, “someday” still hasn’t arrived. Nathan has evolved into a pickpocket and thief, though his main job is as a New York bartender. One evening, Victor “Sully” Sullivan (Mark Wahlberg) comes into the bar to recruit Nathan to help him with a big job.

Nate initially declines – he doesn’t trust Sully – but there’s historical allure in the adventure: finding the all of the gold supposedly hidden by Portuguese explorer Ferdinand Magellan in the early sixteen century. Besides, Sully has had contact with Sam, and Nathan is keen to find his brother, who’s gone silent for the last two years.

Sully and Sam aren’t the only ones after the gold. Sully’s former associate Chloe (Sophia Ali) reluctantly teams up with them, and Sully’s ex Braddock (Tati Gabrielle) is in the employ of wealthy Spaniard Moncada (Antonio Banderas), who believes he has a familiar right to the treasure.

The opening is great, with outrageous perils flying at us and Nathan nonstop. Director Ruben Fleischer consistently displays strong imagination when it comes to the action set pieces, and once we get through the set-up, these come fast and furious.

However, unlike FAST AND FURIOUS, or more to the point, RAIDERS OF THE LOST ARK (a clear point of inspiration here, even though this is contemporary), UNCHARTED doesn’t know how to make us care for its characters.

The filmmakers have made a wise investment in actor Holland, who projects innate charm and decency as Nathan. But writers Rafe Judkins and Art Marcum & Matt Holloway, working from a screen story by Judkins and Jon Hanley Rosenberg & Mark D. Walker, make Sully too amoral and scummy. We’re not rooting for a friendship to bloom. When the expected finally happens, it feels like it’s preordained by marketing algorithms, rather than something that’s evolved organically between the two men.

This isn’t to say all successful caper movies are required to have great interpersonal bonds and a just cause. For example, David Mamet is a writer/filmmaker who can tell compelling stories about unsavory figures trying to forge perilous paths, but he’s not involved here, and UNCHARTED is aiming for a much lighter tone in any case.

In RAIDERS, Indy does have some loyal helpers and is fighting Nazis (causes don’t get more just). In the FAST AND FURIOUS franchise, yeah, everybody is stealing cars, but there’s loyalty. In OCEAN’S ELEVEN, camaraderie is half of why we’re watching. In UNCHARTED, Sully is driven by greed, and everyone we encounter who knows him detests him. We’re not encouraged to root for his opponents, either.

The dialogue, though it is relatively clunker-free, is glib rather than clever. Also, while the action is conceptually splendid, there are too many places where we can tell it’s CGI rather than practical (no problem in a videogame, but an issue in a live-action feature).

The costume design by Anthony Franco and Marlena Stewart, especially for Gabrielle’s character, is marvelous.

There are two mid-end credits sequences in UNCHARTED which suggest a sequel is planned. If a follow-up is made, perhaps it will better match its execution to its ambitions.