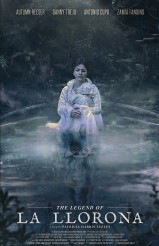 The latest film iteration of the La Llorona legend 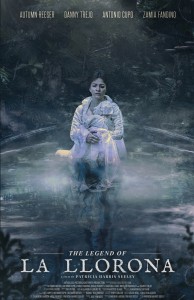 How can you tell them apart? For one thing, LA LLORONA is set and made in Guatemala, and uses the horror genre and a unique interpretation of the legend to tell a story of that country’s history. THE CURSE OF LA LLORONA is set and made in Los Angeles, and has a white American lead, although its plot centers around the Mexican/South American myth of the ghost of a wronged woman who steals living children.

In a prologue, we see two Latinx children who become separated from their parents in the woods at night. They are menaced by the ghostly La Llorona.

Then we’re in sunny daylight. The Candlewood family – mom Carly (Autumn Reeser), dad Andrew (Antonio Cupo), and little boy Danny (Nicolas Madrazo) – are in a cab, heading to their Mexican vacation destination. Cab driver Jorge (Danny Trejo) is friendly and chatty, but Danny is car-sick, and his parents are tense.

Arriving at the B&B, things don’t get better. Their hostess, Veronica (Angelica Lara), is unable to conceal her concern when she sees the family has a child with them. It seems that Andrew forgot to mention Danny when booking their stay, even though the boy requires his own room.

In another movie, this would be a plot point indicating something that doesn’t add up which will factor in later. In THE LEGEND OF LA LLORONA, it’s indicative of the fact that writer Jose Prendes, working from a story he crafted with Cameron Larson and the film’s director, Patricia Harris Seeley, is less than agile with handling specifics.

To be clear, the meta reason for Andrew’s omission is so that Veronica wouldn’t have vetoed the booking in the first place. But since Jorge is a local who knows about the problem, why doesn’t he suggest that the Candlewoods go somewhere else?

This would be less of an issue if this type of question didn’t crop up regularly throughout the film. Exposition gets bunched together. Sometimes we wonder why it’s not brought up earlier, and sometimes it seems irrelevant to the action.

Reeser gives a determined performance, but Carly is written in a way that makes her a problematic protagonist. The family is mourning a tragedy, so we’re inclined to give the character some leeway. Still, even allowing for the possibility that she’s never seen a horror movie or heard a scary story in her whole life, she makes some very counterintuitive decisions.

Cupo, Madrazo, and Lara are all good. There are points where it seems like the filmmakers are leaning heavily on audience goodwill for Trejo to explain things particular to his character, but the actor is a pleasure to watch.

There are some issues concerning which figures are at the center of the narrative, but these matters can’t be discussed without spoiling things. This said, it’s not hard early on to guess at least one big revelation.

Director Seeley creates some good atmosphere, but she and the writers have trouble setting up the supernatural rules. Worse, the people in THE LEGEND OF LA LLORONA take actions that neither seem sensible nor endear them to us. We’re not frightened for them, and seldom frightened overall.