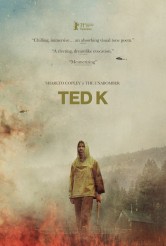 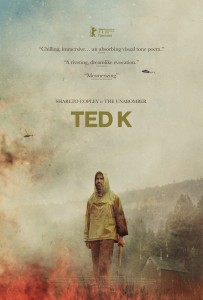 TED K refers to Theodore J. Kaczynski, better known as the Unabomber. He is played here in an excellent performance by Sharlto Copley, who also serves as one of the film’s producers.

An opening crawl informs us that. Kaczynski lived for twenty-five years, without running water or electricity in a ten-by-twelve-foot cabin in the woods outside the Rocky Mountain town of Lincoln, Montana. His activities are described as “sinister,” while ominous music plays.

The crawl also informs us that Kaczynski was born in Chicago in 1942, got into Harvard at age sixteen, and earned a PhD in mathematics.

Kaczynski taught for one year before turning his back on academia and human society in general. In 1971, he and his brother David built the small cabin where Kaczynski lived. The crawl concludes by telling us that TED K was shot on the land where the cabin once stood, and uses Kaczynski’s own words (he wrote a lot of manifestos) to tell the story.

Directed by Tony Stone from a screenplay he wrote with Gaddy Davis and John Rosenthal, TED K does not proceed as its start might lead us to expect. It is not a thriller – action, psychological, any other kind – a procedural, or even an exploration of how Kaczynski became the person we see in the film.

Instead, TED K presents Kaczynski largely as he saw himself, or at least how it might be interpreted he saw himself based on his writings. Kaczynski is well aware of his own rage, and that his murderous activities are more about a desire for revenge than about wanting to make a statement, though he’s happy to do so if he can.

Kaczynski hated and feared technology, which he saw as on its way to dominating humankind. He was also a passionate environmentalist who, whatever else can be said of him, walked the walk. His existence in the forest with no car (he used a bicycle to get into town) or any amenities beyond some tableware was about as carbon-friendly as it gets. Perhaps ironically, Kaczynski comes nearest to the tools of civilization when he’s constructing his bombs.

The filmmakers are in sympathy with Kaczynski’s love of nature, and so are we. The forests, mountains and streams are beautiful, achingly worthy of protection.

Kaczynski’s methods, of course, will be abhorrent to most viewers, and this is where TED K gets a little murky. With less extreme activities, like sabotaging tree-cutting equipment, no one gets hurt. Kaczynski sees this as all of a piece with mailing bombs to people.

Where this is difficult for the audience is discerning how the filmmakers intend us to feel about this. Because Kaczynski sees everything he’s doing as being part of a continuum, are we meant to see it that way? In that case, are we being asked to condemn all forms of protest, or to condone homicide?

It’s fine, even commendable, for a movie not to pound a message home. Given that TED K is told almost entirely from Kaczynski’s point of view, there’s a certain filmic logic here as well. Still, it feels like there’s some authorial disconnect at play, especially because TED K gives us the barest glimpses of the carnage Kaczynski’s bombs wrought. The suffering didn’t register on him, but we can hardly ignore it.

The movie puts a little distance between our perspective and Kaczynski’s – he doesn’t seem aware of his contradictory behavior with his own family, for example, while it’s glaringly obvious to us – but mostly, we’re hearing him in voiceover explaining his reasoning as we see him go about his business.

Kaczynski isn’t big on human interaction. As a result, there are no significant supporting characters. Kaczynski fantasizes about romance with an invented woman (Amber Rose Mason makes an ideal ‘50s-esque helpmate), but has no real friends. We only hear his side of conversations with his mother and brother.

All of this means that TED K doesn’t function as a conventional drama. It is often slow going. We don’t get what happened to Kaczynski to make him a hermit, much less the extensive efforts by law enforcement to catch him. Viewers interested in all of this may want to check out the eight-episode 2017 miniseries MANHUNT, currently available on Netflix and Acorn TV.

Meanwhile, TED K works as a singular look at a singularly hostile individual.