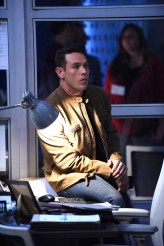 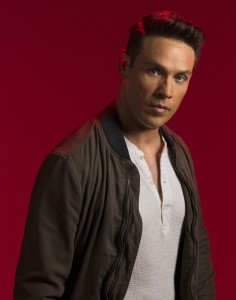 LUCIFER is now streaming its first five seasons on Netflix, with a sixth and final season coming later this year.

In Part 2 of our exclusive interview with Kevin Alejandro, who plays LAPD Detective Dan Espinosa on LUCIFER and has directed four episodes, we talk about the episode “Daniel Espinosa: Naked and Afraid,” written by Mike Costa, adjusting to LUCIFER’s stop-and-start history, and more.

ASSIGNMENT X: You’ve previously talked about doing ride-alongs with real law enforcement personnel for your roles playing police. In terms of playing law enforcement, what is the most valuable thing you’ve learned?

KEVIN ALEJANDRO: It’s to use all the skills that I’ve been taught, and hopefully do it in a respectful, truthful way. It’s always really good to take the things that I’ve learned on the ride-alongs, and things that real police officers have told me, to try and do it myself as realistically as possible, so that we maintain their appreciation. But also, one of the things I love about what we get to do is to jump into someone else’s skin and someone else’s world, and experience it for what it is, even if it is imaginary. That’s part of what I love about being an actor.

AX: How do you feel the dynamic between Dan and Lucifer, played by Tom Ellis, and Dan and the archangel Amenadiel, played by DB Woodside, changed once Dan learned their true natures?

ALEJANDRO: Well, it took Dan a minute to even comprehend what was going on. But with Amenadiel, I think it brought them closer together, after Dan was able to wrap his head around it. And with Lucifer, I think all the way around, Dan’s relationships with all the characters got a little bit stronger throughout the season. I think that there’s still that dance there with Lucifer, but there’s just a little bit of trepidation, because he [Dan] knows that he’s the Devil, and it could go wrong [laughs].

AX: Did Dan ever think, “Well, no wonder Lucifer is so annoying, this explains it”?

ALEJANDRO: Yes, absolutely. I think he actually says it.

AX: We see Dan’s home. Did you have any input into Dan’s household décor? He’s got posters up for BOG SHARK and ZAMBONI. Are those real horror movies?

ALEJANDRO: Those are movies that our writers have come up with. They’re little Easter eggs for our audience. Some of them are from Season 1 and Season 2. You’ll see our writers are really being crafty with those Easter eggs that they throw in there. I had the influence of all of the little qualities that Dan has, with working out, and trying to be clean and healthy with his juices, and the surf décor. So, those were my elements that I got to play around with, and they built upon. 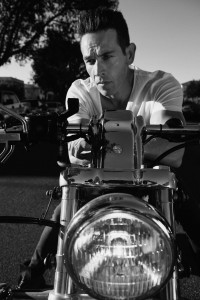 AX: Do you have any input into Dan’s wardrobe?

ALEJANDRO: In the very beginning, the creators come up with ideas of who the characters are, and then when we go through our series of fittings, the influence we have is what fits best. But yeah, we do in a sense. We get to choose between what selection has already been made.

AX: So, they give you options, and then you pick from the options?

ALEJANDRO: Yes. Unless there’s a specific idea. Then I can call in and say, “Hey, what do you think about this for this episode?” And then they’ll shop within that world.

AX: Now, how was doing “Daniel Espinosa: Naked and Afraid”? As someone else said of another actor and another project, you had to pick that episode up and carry it on your back pretty much single-handed.

ALEJANDRO: You know what? It was great. I have been waiting for an opportunity like that, and I loved every single minute. When it was over, I didn’t want it to be. And I hope that I get to do more of those kinds of adventures as an actor. But yeah, for that one episode, I got to carry it as the lead, and man, what an incredible feeling. That’s why Tom loves what he does. He gets to carry the show on his shoulders. It’s exhilarating.

AX: Did everybody give you a little extra support there?

ALEJANDRO: Oh, yeah. I mean, we’ve all said it before – we have the best crew and people ever to work with, which is what I think made us successful. So, yeah. there was never a single day where we weren’t laughing, like guttural, stomach-ache laughs, on that episode. 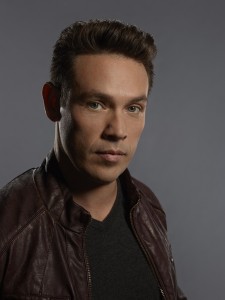 AX: Did you have to figure out the stages of reaction when Dan finally understands what’s happened to him?

ALEJANDRO: Oh, yeah. You have to map that out so specifically, because you want to give the character a journey, and a place to go emotionally. And, because we shoot all out of order, I have to mentally check his journey and where he’s at throughout each moment of the script. So, and I’ll say this to any actor, and I think a lot of them will agree, it’s very important to track your character’s journey and how he or she is affected throughout the story, so that you can give yourself a genuine arc.

AX: When Daniel wakes up in the morning after having his clothes stolen, he’s naked, but the audience doesn’t see the extent of his nakedness. Was that your choice, or was that the writers’/producers’ choice?

ALEJANDRO: That was their choice. And then when he became [visibly, to the audience] naked, that was also their choice [laughs].

AX: So, you were amenable to whatever they wanted to show or not show?

ALEJANDRO: Yeah, I was. It’s such a great group of people that there’s nothing but trust there.

AX: You’ve been playing scenes with Scarlett Estevez as Dan’s daughter Trixie for five seasons now. Was doing scenes with her any different this season, a) because she’s a little older now, and/or b) because those scenes had to carry a little more weight this time around?

ALEJANDRO: Yeah. You know, it’s always amazing to watch her grow. I’ve known her since she had no teeth in the front [of her mouth] in the beginning. So, it’s like watching your own kid grow up, and seeing all of the changes that they go through. And she’s become quite a great actor. She’s always been good, but she’s really holding her own, and understanding who she is as an actor. She’s really, really powerful. I can’t wait for you to see what she does in Season 6. She’s just fantastic. And I loved every moment. I wish we had more moments together, because she was great.

AX: Does being a parent in real life help you play a parent?

ALEJANDRO: Oh, absolutely. I pull from my own parental bag of tricks that worked with my son, and from playing games off-set [with Estevez] to right before we go on, just to warm everything up, to trying them in the scene.

AX: Speaking of your son, how did the film festival screening of your short film THE TALK go? You wrote and directed it, and your son Kaden stars in it.

ALEJANDRO: It did really well, actually. And he killed it, and he loved it. That was his introduction to the festival world, and he got to do a lot of interviews. We got into I want to say ten festivals, fifteen festivals, almost all the ones that we submitted to. It was a really good journey, which led to other good experiences that came from that for other projects.

AX: There is something on your IMDB page called THE KEEPERS, which you directed and starred in. What is THE KEEPERS?

ALEJANDRO: THE KEEPERS was written by my best friend [Stephen Monroe Taylor, who guest-stars as Scotty Thomas in the LUCIFER episode “Spoiler Alert,” directed by Alejandro], the story was by him and myself, and written by his wife [Ashley Taylor]. And it was a little miniseries that we put together as a pilot presentation. It’s the world of superheroes – it’s actually what THE BOYS is now, but in a half-hour, single-camera comedy. So, it was lighter than THE BOYS, but it’s kind of like that. There’s this world of people who are trying to take down supervillains that are hiding. That was my first go at directing something with a budget behind it, and with actors behind it that were of a certain caliber. It was something that Charlie Sheen executive-produced for us. He funded the whole thing, because my friend Stephen, who was one of the stars of it, did a show [ANGER MANAGEMENT] with him. He really liked us, and he gave us that opportunity. 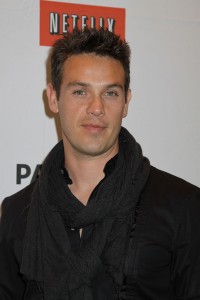 AX: Are you still shopping THE KEEPERS?

ALEJANDRO: No. We shopped it to Netflix way back, way back, way back. And they had just signed the rights to the Marvel stuff, I think. So, it was right before the superhero/supervillain stuff became what it is. This was actually pre-LUCIFER.

AX: That’s pretty exciting. Are you hearing from a lot of people on social media?

ALEJANDRO: Yeah. Everyone is pretty stoked about it. I know our team is, definitely. And of course, you never expect anything like that. You do what you do because you love what you’re doing, and then that’s just the icing on the cake.

AX: By the time you got to the, “Okay, Season 5 is expanding, okay, we’ve got …”, were you sort of used to the ping-ponging that is LUCIFER’s existence, or is it a new “Wow” every time?

ALEJANDRO: It’s always a new “Wow,” but there’s always that little bit of, “Well …” The “what ifs” are a little stronger now. It actually gives me hope for my future jobs. If we get canceled, hopefully someone else will pick us up [laughs].

AX: [laughs] Do you think LUCIFER might go to Season 7?

ALEJANDRO: You know what? I wouldn’t have put anything past them. But once we got picked up for Season 6, Netflix was like, “Okay, I swear this is it. This is it, I promise.” [laughs] So, we wrapped our heads around that. COVID actually proved to be its own challenge within that whole shooting schedule. By the end of it, we were all proud, and exhausted, and I think all of us were excited to see what the future holds.

AX: And what would you most like people to know about LUCIFER at this point?

ALEJANDRO: At this point, I would love everyone to know that we put our blood, sweat and tears into this show, to help create what’s onscreen. And then when they watch it, watch it through the eyes of love, because that’s how we put it together. And I truly think that at the finale of Season 6, people will walk away saying, “That was a good show.”